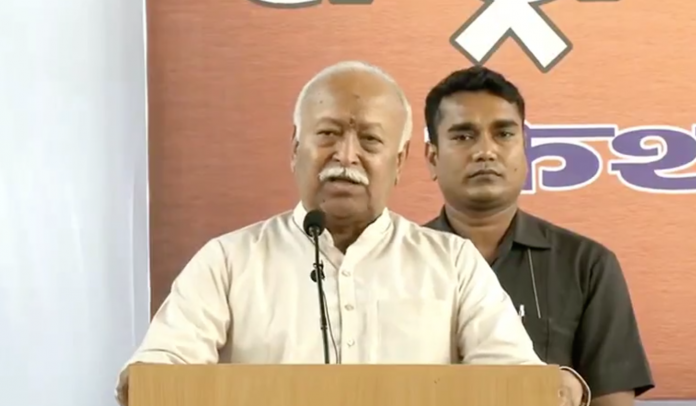 New Delhi: Appealing all sections of society to forget past and come together for the construction of Ram Temple at Ayodhya, RSS Chief Mohan Bhagwat on Saturday said that ‘Indian citizens are Indian citizens’ and cannot be discriminated as Hindus and Muslims.

He said that the government should now take steps to end the dispute. While thanking all for maintaining peace and harmony in society and appealing all to continue to do so Bhagwat said, “The appeal is the same for everyone. Indian citizens are Indian citizens and not Hindus and Muslims.”

“Forgetting all the things that happened in past, we all should come together to build a grand temple at Ram Janma Bhoomi in Ayodhya,” said Bhagwat. “The decision should not be taken as victory or defeat,” he added.

“We believe that the government should take steps to end the dispute in the case after the SC decision,” he added.

The Supreme Court on Saturday directed the Centre to give five acres of suitable land to Sunni Waqf Board and at the same time make necessary arrangements for the construction of the temple by forming a trust.

“Central government shall form in three to four months a scheme for setting up of a trust. They shall make necessary arrangements for the management of trust and construction of the temple,” Chief Justice Ranjan Gogoi said while reading out the verdict.

A five-judge constitution bench presided by Chief Justice Gogoi and comprising Justices SA Bobde, DY Chandrachud, Ashok Bhushan and S Abdul Nazeer passed the order on a bunch of petitions against an order of the Allahabad High Court which trifurcated the site between the parties — Ramlalla Virajman, Sunni Central Waqf Board and Nirmohi Akhara.

A decade-long legal dispute was fought by right-wing party Hindu Mahasabha, a sect of Hindu monks Nirmohi Akhara and Muslim Waqf Board over 2.77 acres of land in Ayodhya.