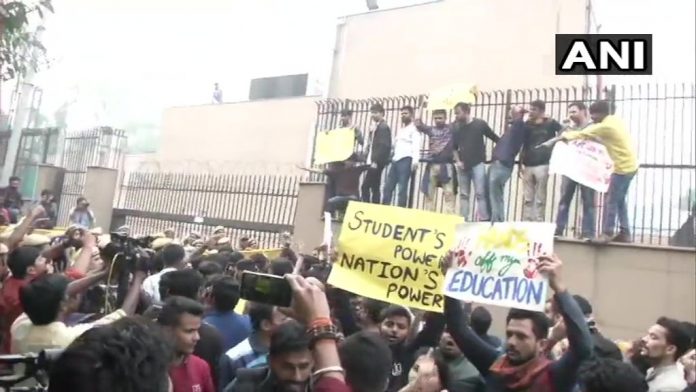 Scores of agitated Jawaharlal Nehru University (JNU) students on Wednesday held a protest against the Vice-Chancellor M. Jagadesh Kumar outside JNU convention center in New Delhi in the lieu of fee hike and new hostel manual announced by the varsity.

In response to the massive protests, JNU Executive Committee announced a major roll-back in the hostel fee and other stipulations.It also proposed a scheme for economic assistance to the Economically Weaker Section (EWS) students, according to R Subrahmanyam, Education Secretary, Ministry of HRD.

ALSO READ: Birthday celebration turns into murder after woman and friend have a tiff

Narrating their ordeal the students told ANI that they wish to discuss the issue with the Vice-Chancellor (VC) but he has been abstaining from initiating talks on the matter.

“We want to hold a discussion with the VC on the issue of fee hike and new hostel manual. He is not responding to us and has not even met us once,’ said Aishee Ghosh, president Jawaharlal Nehru University Students’ Union (JNUSU) told ANI.

“It is extremely bad on the behalf of the admin to hike the fees. It would be difficult for economically backward students to complete their education this way. People here belong to different economic backgrounds,” said another protester.

JNU students have been protesting against the fee increase and new hostel manual which also includes provisions on dress code and curfew timings since October 28.

The matter blew out of proportion last week after a clash broke out between the students and police during the students’ protest.