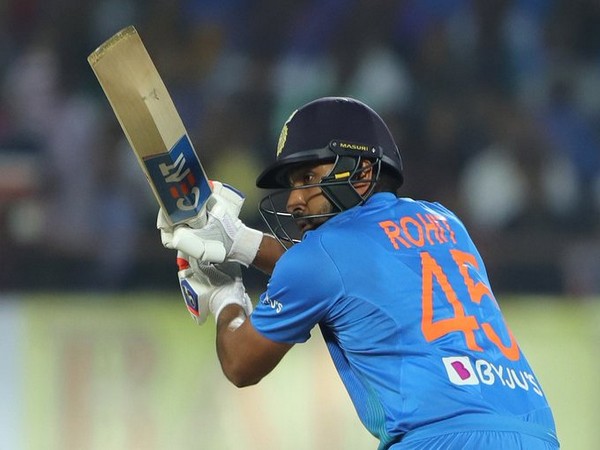 Sharma played a knock of 85 runs off just 43 balls & also guided India to an eight-wicket win over Bangladesh in the second T20I of the three-match series at the Khandheri Cricket Stadium.

With this win, India has levelled the three-match series at 1-1.

Chasing 154, India got off to a steady start as openers Rohit and Shikhar Dhawan did not allow Bangladesh to get early breakthroughs. The skipper Rohit maintained high strike-rate from the very start and after the conclusion of the first six overs, India managed to reach a score of 63/0.

After the conclusion of the first six overs, Dhawan also got among the act and he along with Rohit ensured that the scoreboard keeps on ticking at a rapid pace for the hosts. The duo of Rohit and Dhawan brought up their 100-run partnership inside ten overs.

Bangladesh finally got the breakthrough in the 11th over as Aminul Islam clean bowled Dhawan (31). Immediately after Rohit (85) was also sent back to the pavilion by Aminul, reducing India to 125/2.

However, KL Rahul (8*) and Shreyas Iyer (24*) ensured India’s victory by eight wickets and with 26 balls to spare.

Earlier, Mohammad Naim and Mahmudullah’s knocks of 36 and 30 respectively enabled Bangladesh to post a score of 153/6 in the allotted twenty overs.

Openers Liton Das and Mohammad Naim put on a strong foundation for Bangladesh in the opening six overs. In the fifth over, it looked like Yuzvendra Chahal had Liton stumped, but wicket-keeper Rishabh Pant had collected the ball in front of the stumps and as a result, the batsman was ruled not out and a free hit was awarded to the visitors. Bangladesh finished the powerplay overs at the score of 54/0.

India finally got the breakthrough in the eighth over as Liton (29) was sent back to the pavilion by Pant via a run-out. Soon after, in the 11th over, Washington Sundar dismissed Naim (36) to reduce Bangladesh to 83/2.

The match-winner from the first match, Mushfiqur Rahim (4) failed to leave a mark as Chahal had him caught at the deep mid-wicket. In the same over, the left-arm spinner Chahal had Sarkar (30) stumped to leave Bangladesh in a spot of bother.

In the final five overs, skipper Mahmudullah ensured Bangladesh does not lose momentum and he kept on playing big shots to keep his side’s run-rate in check. He got out in the penultimate over, but Bangladesh ensured they post a score of more than 150 runs on the board.

India and Bangladesh will next lock horns in the final T20I of the three-match series on Sunday, November 10 in Nagpur.