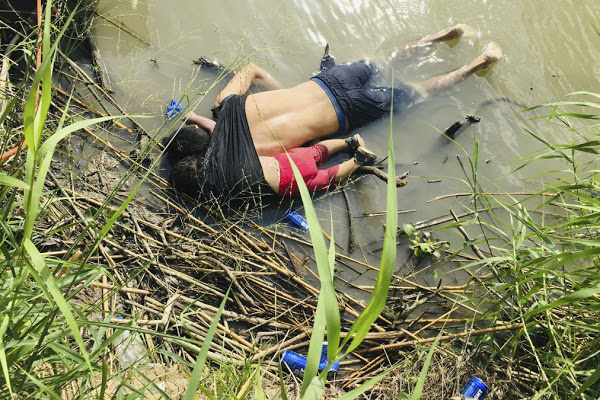 An overtly graphic image of drowned bodies of the Salvodoran father and daughter lying with their faces down in the water of the Rio Grande, part of the US border with Mexico, are being circulated over social media forums.

The heart-wrenching image of the duo has sent the world on a path of nostalgia, as it greatly depicts the sea washed body of little Aylan Kurdi, in Turkey. The iconic 2015 image of the drowned toddler lying in the sand continues to stir discussion over policies toward migrants.

Several people have took to twitter, sharing and re-posting the picture where the little girl is seen clinging onto her father’s shoulder’s as the body’s lay washed over on the river bank filled with disposed cans of coke and beer.

Oscar Alberto Martinez and his daughter, Angie Valeria M.,were identified by the El Salvador officials, they drowned in the currents of the Rio Grande on Sunday as they tried to slip into the United States.

The Image sends into a whirl a series of debates over the plea of migrants, with numerous losing their lives in the journey.

This is what a broken immigration system looks like.

“I was a stranger and you did not welcome me” (Mt. 25)
The story behind the photo of Óscar Alberto Martínez Ramírez and his 23-month-old daughter, Valeria. https://t.co/F4c5qm4DjX

America was once a beacon of hope for families fleeing horrendous conditions, and it should be again. Óscar Alberto Martínez Ramírez & his daughter, Valeria, died simply in search of a better life. Julia Le Duc at @AP captured the gut wrenching consequence of our inhumanity. pic.twitter.com/0vskO17y1K

Even those of us who didn’t vote for this cruel psychotic in the White House — what are we going to do?

Óscar Alberto Martínez Ramírez and his daughter Valeria wouldn’t have attempted that river crossing if we had a sane and moral asylum policy. 12/ pic.twitter.com/B2pPYp4PtS