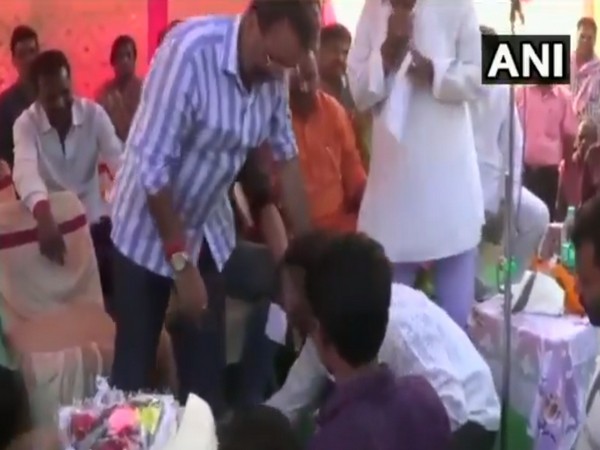 A BJP party worker washed MP Nishikant Dubey’s feet and drank the used water, stirring a hornet’s nest. The Congress party on Monday reacted to the incident and launched a scathing attack with Congress spokesperson Randeep Surjewala demanding action against the Dubey.

“The arrogance of the ilk of BJP leaders like Nishikant Dubey who are habitual offenders of insulting others, of breaking the tradition and of self-prophesying a God-like status for themselves, is now out in open,” Surjewala said.

The incident took place on Sunday when the MP from Jharkhand’s Godda visited Kanhavara village of his constituency to announce the construction of a bridge. Onlookers filmed the episode, which was also shared by Dubey on his Facebook page, however, he later deleted it.

In the video, a BJP worker, Pawan, can be seen washing Dubey’s feet and drinking the used water. Earlier in July, Dubey made the headlines after he said that his party members fear that hugging Congress president Rahul Gandhi might lead to divorce.

“Has the arrogance of BJP leaders reached such a zenith that now they want their Karyakartas and common people to wash their feet and drink that water? Is it even humane in the 21st century?,” Sujrewala added.

Raising question over the culture and ethics of the BJP, Surjewala said, “Is this the culture and ethics of the BJP that Prime Minister Narendra Modi and BJP president Amit Shah speak about? Will they take action against Dubey. If they will not take action then it will be proved that it is with active support and connivance of Prime Minister and BJP president that such elements like Nishikant Dubey continue to profess inhumane and insulting practices in today’s world.”