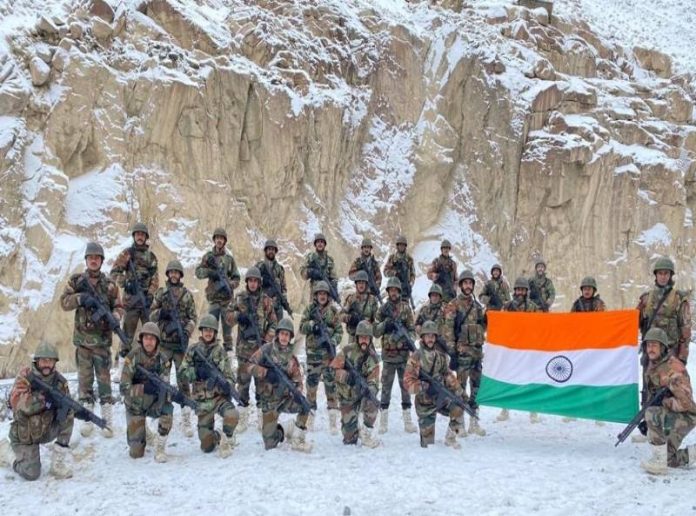 In a display of flag-for-flag strategy to counter and call the bluff of the Chinese propaganda machinery, Indian Army troops held a large tricolour at Galwan valley in Eastern Ladakh as it was three days ago that a video was played up on Chinese state media showing PLA troops holding their flag purportedly somewhere in the area of Galwan valley.

Galwan valley was the scene of brutal clashes between Indian Army troops and PLA soldiers in the summer of 2020. On the occasion of the New Year, Indian and Chinese troops had exchanged sweets at border posts along the Line of Actual Control (LAC), including areas of eastern Ladakh. The bonhomie seemed to have pushed into the background the continuing standoff between the two sides along the LAC in Eastern Ladakh over the past two years.

However, the bonhomie did not last long and the video surfaced of PLA troops holding their flag in a mountainous region which elicited a befitting response from the Indian troops as well.

The fact remains that China is clearly showing its aggressive intention and the PLA is also relentlessly constructing infrastructure near the LAC, giving enough signals that PLA troops have pitched in for the long haul. Satellite imagery also showed that China is building a bridge on the Pangong Tso lake.

India will have to maintain a high state of alert and at the same time continue to upgrade and construct infrastructure along the LAC. India’s efforts to increase its military prowess, building roads and bridges along the LAC have meant that China remains ever watchful and on its toes. India will need to match preparedness at the border areas with those of its belligerent neighbour.