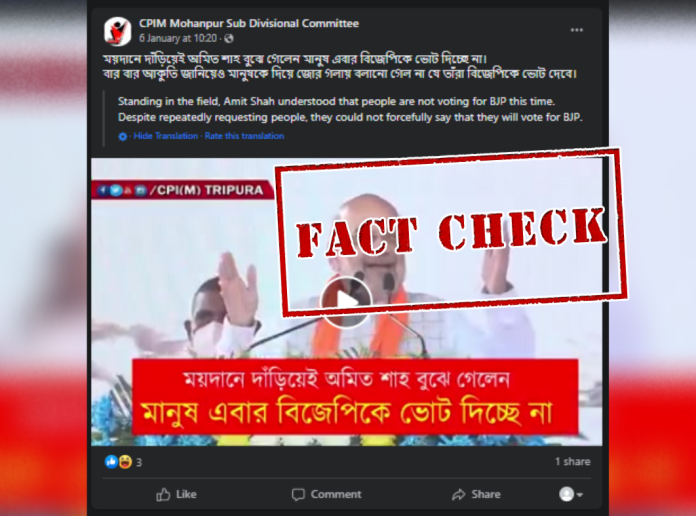 A viral video showing Amit Shah asking people to speak up in one of his rallies is doing the rounds on social media. It is being claimed that people in Shah’s rally refused to speak up when asked about voting for BJP in the upcoming Tripura elections. 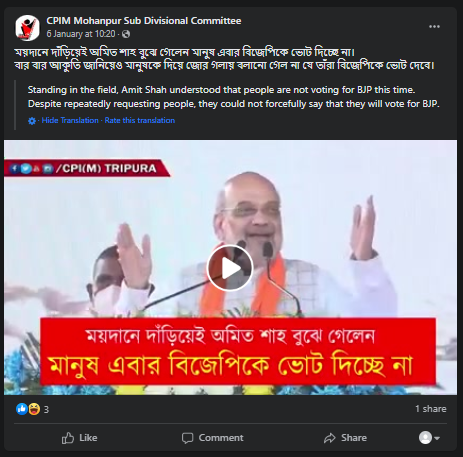 The text on the video translates to: Amit Shah understood while standing on the field. People are not voting for BJP this time.

The video starting 21:15 matches the initial segment of the viral clip, and we can hear him ask the audience whether they would vote for the BJP or not (kamal ke nishaan par button dabaayenge kya?). He then asks them to say it more loudly and further asks them whether they would vote for the BJP, strengthen Modi’s arm and strengthen Manik Saha’s case as well (zor se bolo dabaayenge, modiji ke haath mazboot karenge, Dr. Manik Saha ke haath mazboot karenge). After this, the crowd can be heard cheering loudly on his command.

The latter half of the viral clip also contains the same speech by Shah live telecasted on his official Twitter profile on January 5, 2023.

At the very beginning, we hear him chant Bharat Mata ki Jai. When he doesn’t get a good response from the crowd, he tells his audience that the voice of people from North Tripura was way louder than Sabroom, so it is here that he asks the audience, “esa chalega kya? Zara firse se boliye chalta hai kya?” and then he chants Bharat Mata ki Jai again. 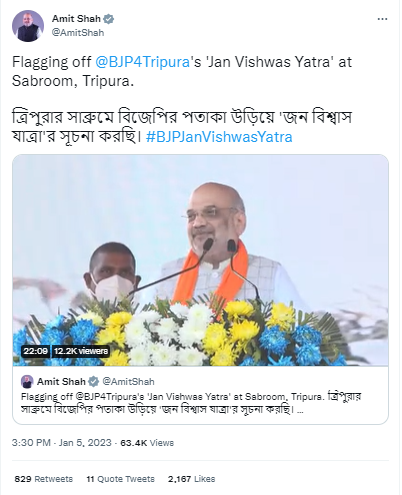 It is clear from the YouTube and Twitter videos that two segments from the beginning and the end have been combined to show a non-responsive crowd in the viral clip.

Therefore, we can conclusively say that the viral video claiming the crowd remained silent when Amit Shah asked them about voting for BJP is misleading.