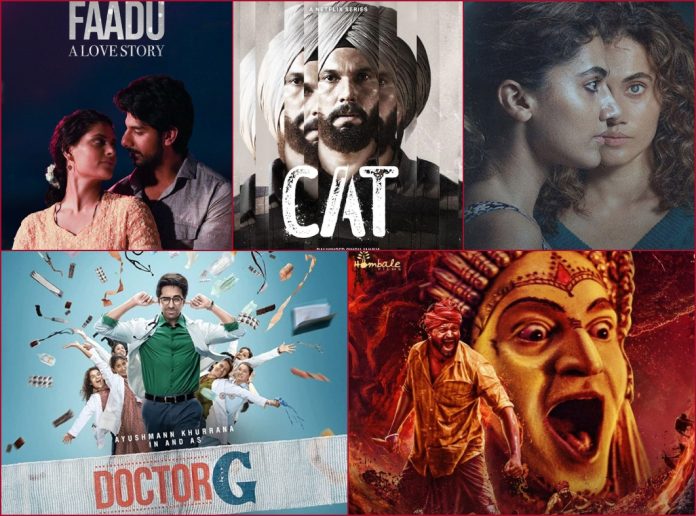 This week of December is a busy week for binge-watchers. There is no shortage in content for every mood and every genre in the last month of the year.

We have listed the best of fresh releases of this week.

Taapsee Pannu’s first production venture, Blurr also stars herself and Gulshan Devaiah. She will be seen playing the role of twin sisters. The story is about a twin who sets to find the real reason behind her twin sister’s death and many truths unfold in the journey. Blurr is a remake of the 2010 Spanish horror film Julia’s Eyes.

Samantha Ruth Prabhu starrer Yashoda has made its way to OTT. The film is about a woman who agrees to join a surrogate program out of desperation to find her missing sister. The story starts developing when revelations about the high-end surrogate facility come to light.

After a decent run at the box office, Ayushmann Khurrana and Rakul Preet Singh’s Doctor G is releasing on OTT. The film follows the struggles of a male doctor who is interested in orthopedics but instead becomes a gynecologist, and then leading to chaos. It also featured Shefali Shah and Sheeba Chaddha in pivotal roles.

Faadu: A Love Story is a story of two lovers with dissimilar worldviews, Pavail Gulati and Saiyami Kher, tell their love story. While Saiyami’s character appears to be more grounded in the series teaser, Pavail’s character is a hustler who came from the slums and likes to cut shortcuts.

Watch Faadu: A Love Story on SonyLIV, released on December 9.

In CAT, Randeep Hooda is seen playing the role of Gurnam Singh, who is a simple and innocent man trapped in a drug trafficking conspiracy and the story revolves around what all he has to face because of the involvement of some powerful people. The web series also features Hasleen Kaur, Geeta Aggarwal, Dakssh Ajit Singh, Jaipreet Singh, Sukhwinder Chahal, Pramod Pathal, KP Singh, and Kavya Thapar.

While Rishabh Shetty’s film Kantara was earlier released in Kannada, Tamil, Telugu and Malayalam on Amazon Prime Video, its Hindi version is now releasing. The story of Kantara is set around a small community living in the woodlands of Kaadubettu in the southern coastal state of Karnataka. Weaving an interesting plot of human versus nature conflict, where death leads to war between villagers and evil forces and Shiva, a rebel defends his village and nature.