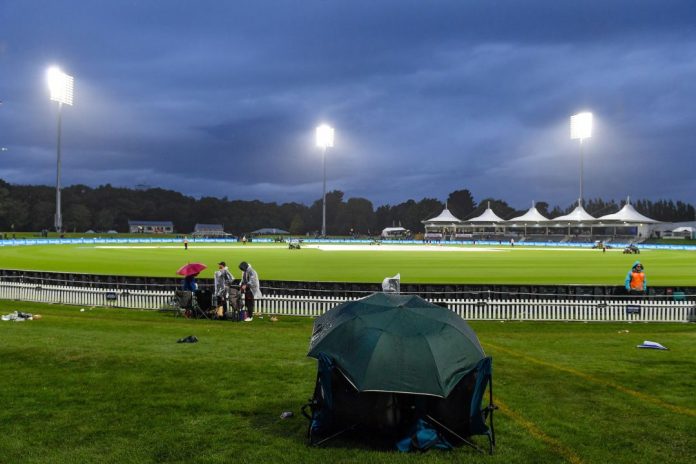 Christchurch: New Zealand seizes the ODI series after the final match was called off due to rain against India on Wednesday.

Earlier in the first inning, crucial knocks by Shreyas Iyer and Washington Sundar guided India to a respectable total of 219 against New Zealand.

Iyer scored the highest for India with 49 runs in 59 deliveries, while Sundar scored a knock of 51 off 64 to help Men in Blue post a respectable total against the hosts.

Put to bat first, India got off to the worst start as they lost their opening duo of Shubman Gill and Shikhar Dhawan within the 13 overs of the game. Milne rattled India’s top order as he dismissed Gill for 13 off 22 and skipper Dhawan for 28 off 45 deliveries, leaving the Men in Blues’ score at 55/2 in the 13th over of the game.

Shreyas Iyer and Rishabh Pant then tried to form a partnership for struggling India and slammed New Zealand bowlers all around the ground. However, the blistering partnership was broken by Daryl Mitchell as the bowler sent Pant packing after scoring 10 runs off 16 deliveries.

Suryakumar Yadav came out to bat but the stylish batter failed to contribute to his team as Milne struck again for New Zealand and sent Suryakumar back to the pavilion after scoring just 6 runs in the 25th over of the game.

Iyer’s stint was also cut short as he fell one run short of his 14th ODI fifty and departed after scoring 49 off 59 on the delivery of Lockie Ferguson in the 26th over of the game. Washington Sundar then came out to bat. After 30 overs of the game, India’s score read 135/5.

Tim Southee then gave India a big blow as he dismissed Deepak Hooda for 12 in 25 balls in the 34th over of the game, leaving India tottering at 149/6. Deepak Chahar then came out to bat.

Sundar then opened his hands and slammed Southee for 8 runs with his back-to-back two fours. New Zealand pacers continue to dominate the Indian batters. Chahar then tried to play aggressively, costing him his wicket as he was sent back to the pavilion after scoring 12 runs in 9 balls.

With a stunning mighty six over mid-wicket Sundar brought up his maiden ODI fifty in just 62 balls, however, his stint at the crease was cut short as Southee sent the batter back in the pavilion after scoring 51 off 64 balls in the 48th over of the game to bundle out India for 219 in 47.3 of the game.