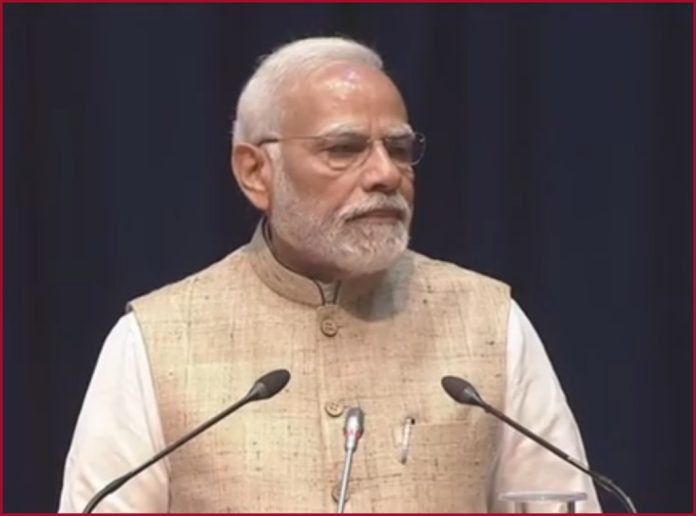 On November 26, 2008, 10 highly armed Pakistani terrorists from the Lashkar-e-Taiba (LeT) staged a coordinated attack on five places in Mumbai. The cold-blooded attacks took the lives of over 160 innocents and wounded over 300.

“Today is also the anniversary of Mumbai TerrorAttack. 14 yrs back, when India was celebrating its Constitution and citizens’ rights, enemies of humanity carried out biggest terror attack on India. I pay tribute to those who lost their lives in the attack,” PM Modi said.

Today is also the anniversary of #MumbaiTerrorAttack. 14 yrs back, when India was celebrating its Constitution & citizens’ rights, enemies of humanity carried out biggest terror attack on India. I pay tribute to those who lost their lives in the attack: PM on #ConstitutionDay2022 pic.twitter.com/MXaQ8MhGaV

Prime Minister Modi also said that India getting the G-20 presidency is a great achievement for India.

“India is marching ahead as a global power. World is watching India pro-people policy is bringing relief to all especially women, weeding out old laws is one of our priorities. On Aug 15 speech from Red Fort I emphasised on our duties. We have made a plan for next 50 years. Azadi ka amrit kaal is kartavya kaal. We will soon reach a new level of development. we are meeting several challenges. we are going to get presidency of G-20. This is a massive achievement,” he added.

In today’s global situation, the eyes of the entire world are on India. Amid the rapid development of India, its quickly growing economy & its strengthening global image, the world is looking at us with great expectations: PM Narendra Modi, on #ConstitutionDay2022, in Delhi pic.twitter.com/3pHdTFNZHY

PM Modi also called on youth of the country to participate more in discussions and debates regarding the constitution.