5 OTT Crime Thrillers You Must Watch On a Sunday Night | Newsmobile
Tuesday, November 29, 2022 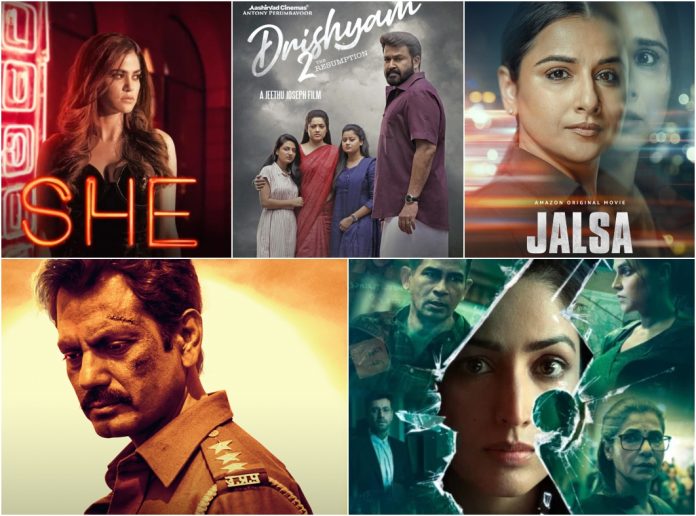 Crime, suspense, thriller, and mystery are the flavors of new movies. The crime-thrillers have set a record for having the most viewers across all streaming platforms in the nation among all the web series that have been released online in the last few years.

Here is a list of the 5 best crime-thriller over Netflix, Hotstar, and Amazon Prime, perfect for the times you confuse about what to watch.

Nawazuddin Siddiqui plays a police inspector in Raat Akeli Hai who is tasked with investigating what caused a patriarch to mysteriously pass away on his second wedding night. He begins to cast suspicion on the entire family, turning everyone into a suspect with a convincing reason. One of the underrated crime thrillers, Raat Akeli Hai, becomes more interesting with each passing minute. Shivani Raghuvanshi, Shweta Tripathi, and Radhika Apte all play significant roles in the film. Watch ‘Raat Akeli Hai’ on Netflix.

The Mohanlal starrer takes you on a thrilling ride, bringing back Georgekutty and his family after a leap of six years. While the family has finally settled and moved on after outsmarting the police investigating the murder of Varun Prabhakar, his daughter’s classmate who was accidentally killed by her during a sexual assault attempt, the fear of police looms large and comes back to haunt them as the investigation into the case starts again. Will Georgekutty be able to save his family this time as well? Watch ‘Drishyam 2’ on Amazon Prime Video.

A Thursday is a recent Hotstar release that is worth watching. A playschool teacher abducts 16 young children and demands something, which shocks not only the Mumbai police but the entire country. Yami Gautam Dhar, Karanvir Sharma, Atul Kulkarni, Neha Dhupia, Dimple Kapadia, Kalyanee Mulay, Maya Sarao, and Boloram Das are among the actors who appear in the film. Watch ‘A Thursday’ on Disney+ Hotstar.

The crime thriller stars Vidya Balan in lead and revolves around a hit and run of an 18-year-old girl looks pretty promising and engaging storyline. The shoe has a journalist, a mother, a cop, and a system – some trying to unveil the truth and some trying to hide it under the carpet. There is an ethical dilemma involved. The story shows that there is no such thing as the pure truth. Watch ‘Jalsa’ on Amazon Prime Video.

Following some terrifying incidents in the previous season, our typical Mumbai police officer is back and more self-assured than ever as she gets ready for her next undercover confrontation with drug lord Nayak. Watch ‘She Season 2’ on Netflix.