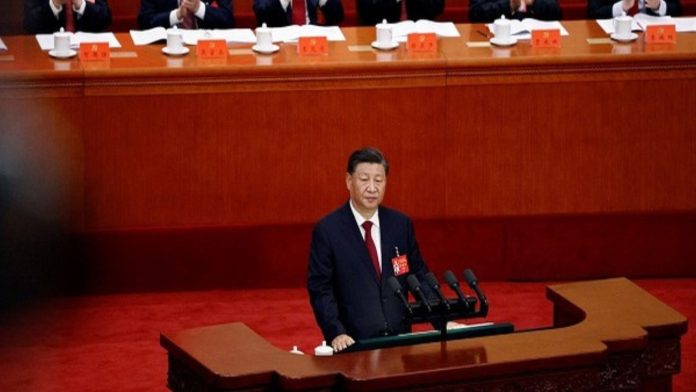 Beijing: With Chinese President Xi Jinping was elected as a general secretary of the 20th Central Committee of the Communist Party of China (CPC) however, the coming days are expected not to be easy for Taiwan.

According to a report by Geopolitica, Xi said “We will safeguard the overall interests of the Chinese nation and take resolute steps to oppose ‘Taiwan independence’ and promote reunification. Resolving the Taiwan question that must be resolved by the Chinese.”

He further said, “We will continue to strive for peaceful reunification with the greatest sincerity and the utmost effort, but we will never promise to renounce the use of force, and we reserve the option of taking all measures necessary,”.

Earlier, Xi Jinping has been asserting the need for “complete national reunification”. The report further added, In 2019, the Chinese leader reiterated the formula to reiterate Taiwan into China under the idea of “one country, two systems”, the same formula applied to Hong Kong.

However, Geopolitica cited the US intelligence community to say that China might prepone the plan of its attack by as early as 2024. Incidentally, it will also coincide with the Taiwanese Presidential elections.
What makes Taiwan such an important international player, is the island nation being the highest producer of the world’s semiconductor chips.

Although the two countries have had problems in the past, the tensions intensified specifically this year when US House speaker Nancy Pelosi visited Taipei in August.

The visit was followed by cyber-attacks and the largest-ever military exercise around Taiwan, from the Chinese side. It also termed Pelosi’s visit a “dangerous, reckless and irresponsible provocation,” reported Geopolitica.

In addition to that, China has also tried to isolate Taiwan by forcing many countries to switch their diplomatic recognition from Taiwan to China in return for Chinese aid and investment promises, reported Geopolitica.

On the other hand, Taiwan has accused China of bribing politicians of other countries to recognise China over Taiwan, just like the case in the Solomon Islands and Guatemala cases.

The tension between the two countries has further intensified, ever since Tsai Ing-wen took over the presidency of the island nation in 2016. Under her rule, Taiwan has gotten close to the US in developing submarine technology to strengthen its military, Geopolitica reported.

Also, under the Biden administration, the US too has toughened its approach to China in the name of defending Taiwan’s sovereignty.

The Biden administration recently notified Congress of its plan to offer more than $1 billion in weapons and military support to Taiwan. The US is even trying to accommodate Taiwan in some international forums, reported Geopolitica.

Under the Taiwan Relations Act 1979, the United States is committed to making sure that Taiwan can defend itself.

However, most experts believe that instead of just focusing on the military aspect, the US should also look at the bilateral aspect and strengthen Taiwan’s international standing.

Beijing is leaving no stone unturned in pressuring and threatening Taiwan on the diplomatic, economic as well as on military fronts. So, if Xi’s statements at the Party Congress are anything to go by, then activity from Beijing’s side is only expected to increase.

Given this increasing assertive and nationalistic posture from China, Taiwan can no longer afford to drop its guard, Geopolitica stated.