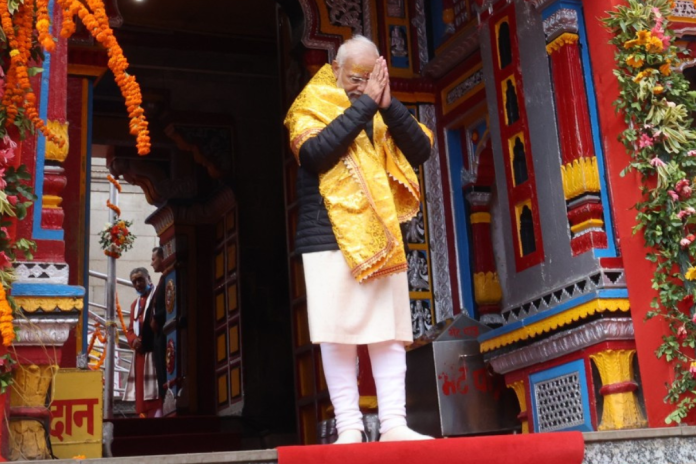 Badrinath: Prime Minister Narendra Modi on Friday said that the construction of ropeway projects will provide a fillip to economic development in Uttarakhand, adding that heritage and development are the two pillars on which a new India of the 21st century can be built.

“Due to the darshan of the lord, me and my country-people are blessed,” he said.

PM Modi said that this decade will mark huge success in the history of New India, adding that “To create the new India of 21st century we have to follow 2 pillars: 1. Be proud of our heritage and 2. Make every effort for development with the strength of Sabka Prayas.”

He said that the ropeway (Gaurikund to Kedarnath and Govindghat to Hemkund Sahib) is not just for providing connectivity but will also give a fillip to the economic development in the state.

“The construction of ropeway projects (Gaurikund to Kedarnath and Govindghat to Hemkund Sahib) is not just to provide connectivity but it will give a fillip to the economic development in the state. The launch of the ropeway at Shri Hemkund Sahib will light up celebrations throughout the world,” said the PM.

The Prime Minister also said that we need to completely free ourselves from the colonial mindset.

He said that the development initiatives in places of spiritual importance are helping devotees and promoting tourism at these places.

“The development of spiritual places will not only provide convenience to all the devotees but also attract the youth of this country. All development initiatives in our country should also focus on inclusivity. A ropeway will allow Divyangs easy access to our places of religious & spiritual importance,” he added.

According to the Prime Minister’s Office (PMO), the two road widening projects – from Mana to Mana Pass (NH07) and from Joshimath to Malari (NH107B) – shall be another step towards providing last-mile all-weather road connectivity to our border areas. Apart from boosting connectivity, these projects will also prove beneficial from a strategic point of view as well.

Prime Minister Narendra Modi reviewed the progress of development work of the riverfront in Badrinath on Friday.

Before arriving in Badrinath, PM Modi visited Kedarnath Dham in Rudraprayag and offered prayers donning a traditional pahadi outfit, Chola Dora, that was gifted to him by Himachali women during his tour to the state.

He later laid the foundation stone of the Kedarnath ropeway project and after that visited the Adi Guru Shankaracharya Samadhi Sthal.

He reviewed the progress of development works along Mandakini Asthapath and Saraswati Asthapath. PM Modi also interacted with the construction workers engaged in the Kedarnath Dham development project.

According to the PMO statement, the ropeway in Kedarnath will be around 9.7 km long and will connect Gaurikund to Kedarnath, reducing the travel time between the two places from 6-7 hours at present to only about 30 mins.

The Hemkund ropeway will connect Govindghat to Hemkund Sahib. It will be around 12.4 km long and will reduce the travel time from more than a day to only about 45 mins. This ropeway will also connect Ghangaria, which is the gateway to Valley of Flowers National Park, said the PMO statement.

The ropeways, which will be developed at a cumulative cost of around Rs 2,430 crore, are an environmental friendly mode of transport that will provide a safe, secure and stable mode of transport. This major infrastructure development will give a boost to religious tourism, which will give a fillip to the economic development in the region and lead to the creation of multiple employment opportunities as well.

Kedarnath and Badrinath are among the most important Hindu shrines. The area is also known for one of the revered Sikh Pilgrim site – Hemkund Sahib. The connectivity projects are aimed to ease access and improve basic infrastructure in places of religious significance.