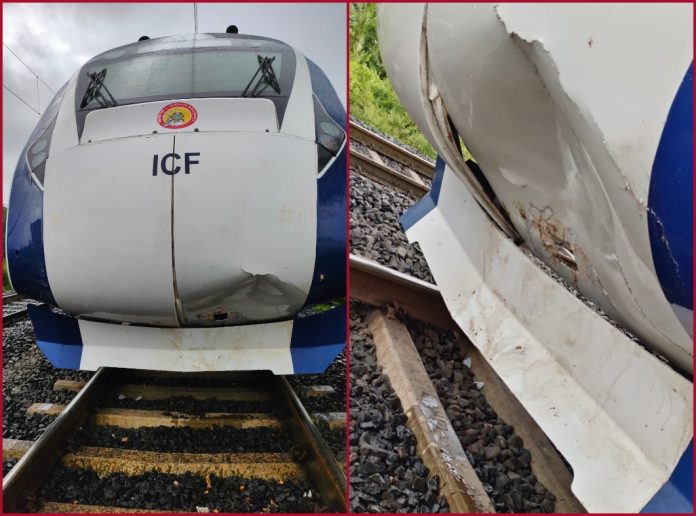 Ahmedabad: The Gandhinagar-Mumbai Vande Bharat Express hit a cow near Anand station in Gujarat on Friday.

The clash of the newly-launched semi-high speed train did not sustain major damage, except for a minor dent on the nose cone panel, an official reportedly said.

On Thursday, the Gandhinagar-Mumbai Vande Bharat Express, which was recently flagged off by Prime Minister Narendra Modi, hit four buffaloes and its nose cone had to be replaced.

The officials said the train resumed its journey to Gandhinagar after an eight-minute halt and arrived there as per scheduled.

Vande Bharat Express running b/w Mumbai Central to Gurajat’s Gandhinagar met with an accident after a herd of buffaloes came on the railway line at around 11.15am b/w Vatva station to Maninagar. The accident damaged the front part of the engine: Western Railway Sr PRO, JK Jayant pic.twitter.com/OLOMgEv10G

Modi flagged off the Vande Bharat Express train at Gandhinagar station on September 30 and rode it to Ahmedabad. This is the third Vande Bharat train in the country.  The other two run from New Delhi to Katra and Varanasi, respectively. The new Vande Bharat train runs six times a week.