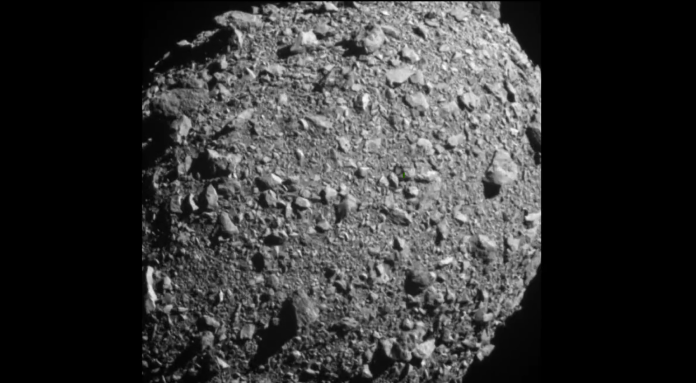 “IMPACT SUCCESS! Watch from #DARTMIssion’s DRACO Camera, as the vending machine-sized spacecraft successfully collides with asteroid Dimorphos, which is the size of a football stadium and poses no threat to Earth,” NASA tweeted, taking to Twitter.

Termed humanity’s first test of planetary defence by NASA, the main objective behind the mission was to redirect the asteroid closer to Didymos, which it orbits, CNN reported.
The asteroid system was the perfect target to test kinetic impact, which may be needed if an asteroid is ever on track to hit Earth.

As per CNN, the process took place when a briefcase-size CubeSat hitched a ride with DART and three minutes after impact, it flew by Dimorphos to capture images and video which will be streamed back to Earth in the coming weeks and months.

The mission is known as the Double Asteroid Redirection Test (DART), according to NASA.

NASA reported that with a diameter of about 525 feet (160 meters) Dimorphos is the smaller of two asteroids in a double-asteroid system. Dimorphous orbits the larger asteroid Didymos every 11 hours and 55 minutes.

The DART spacecraft is designed to collide head-on with Dimorphos to alter its orbit, shortening the time it takes the small asteroid to travel around Didymos.

When DART hits the surface of the asteroid, its kinetic energy will be 10 billion joules. A crater will be formed and material known as ejecta will be blasted out due to the impact. In the days following the event, NASA expects to receive images of the impact from a CubeSat that will be deployed by DART before impact, states the Space agency.

Even though there are no known objects currently posing a threat to Earth, scientists continue scanning the skies for unknown asteroids. Should one be discovered, NASA is actively researching and planning for ways to prevent or reduce the effects of a potential impact.
In future, by using the knowledge gained from this demonstration, similar techniques can be used to deflect an asteroid or comet away from our planet if it were deemed hazardous for the Earth.