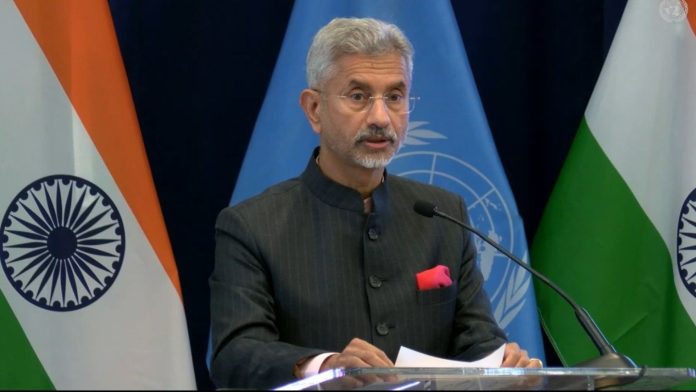 New York: External Affairs Minister S Jaishankar on Saturday said that the country’s own development is inseparable from the rest of the world.

He said that “In the 18th century, India accounted for a quarter of the global GDP. By the middle of the 20th, colonialism ensured that we were one of the poorest nations in the world. That was our state when we became the founding member of the United Nations,”.

He said in the 75th year of its independence, India stands before the UN today “proudly as the fifth biggest economy in the world” and is still rising as the “strongest, most enthusiastic and definitely the most argumentative democracy”.

He spoke of the progress of digital public infrastructure in India and said it is designed to ensure that “no one is left behind.”

“In recent days digital technology has successfully advanced our food safety net to 800 million Indians. More than USD 300 billion of benefits have been distributed digitally, and 400 million people get food regularly.”

“India today envisions itself as a developed country by 2047, at the 100 years of our independence. We dream of digitizing our most remote villages and landing on the moon,” he said and smiled saying “perhaps digitizing” the moon as well.

Taking note of how the world was affected by the Covid pandemic, the minister said that India has administered over two billion vaccinations.

“During Covid Pandemic we responded with vaccines to Africa, Caribbean, Latin America etc,”. The minister said India’s “foundational belief is that its own development is inseparable from that of the rest of the world.”

“Without doubt, our progression has also benefited from our interface with the United Nations. India was the founding member of the UN and as we mark 75 years of freedom, we also celebrate 75 years of our partnership with the UN,” he said.

He said India’s “multifaceted partnership with the UN is significantly reflected in the area of peacekeeping.”