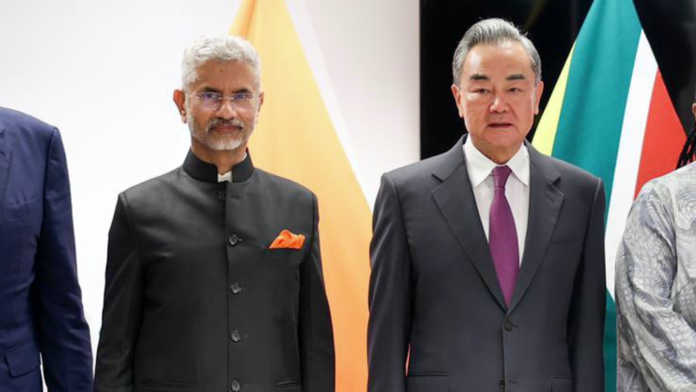 The two leaders came face-to-face for a BRICS foreign ministers’ meeting which was hosted by South Africa.

The meeting also witnessed the presence of Russian Foreign Minister Sergei Lavrov. In the BRICS meeting, the ministers exchanged views on major global and regional issues on the United Nations (UN) agenda in the political, security, economic, financial and sustainable development spheres, as well as on intra-BRICS activities.

The ministers also discussed the possibilities for mutual support for their initiatives at the 77th session of the United Nations General Assembly (UNGA). They expressed support for the continued cooperation of BRICS members in areas of mutual interest, including through regular exchanges among their Permanent Missions to the UN.

Since its inception, BRICS, which added South Africa in 2011, has been united in calling for more representation of major emerging economies on the world’s stage — and against what it views as a disproportionate dominance of the Western powers. However there is the longstanding source of internal friction within BRICS remains unresolved while tensions between India and China, which in 2020 spiralled into a violent border clash. Critics say BRICS significance may be eroded when China violated two decades of agreements with India. BRICS went on life support in the Galwan Valley, not in New York.

Tanvi Madan, senior fellow in the foreign policy programme at Brookings Institution, said, “There’s a chill between India and China not just due to the 2020 crisis, but also because of Indian concerns about Chinese actions in South Asia, in the Indo-Pacific, and in international institutions like the UNSC. It is only natural that that will affect groupings like BRICS in which both participate.”
But the suspense remains on the bilateral meeting between India and China on the sidelines of the United Nations General Assembly (UNGA). Jaishankar has planned for more than 50 meetings on the sidelines of UNGA but no bilateral meetings have been planned with China. Chinese Foreign Minister is also in New York to attend the UN General Assembly.

Earlier in the day, Jaishankar took a veiled dig at China over its putting on hold the blacklisting of Lashkar-e-Taiba (LeT) terrorist, Sajid Mir as a “global terrorist.”

He is India’s most wanted terrorist and was involved in the 2008 Mumbai attacks.

Jaishankar said some countries have facilitated impunity “when it comes to sanctioning some of the world’s most dreaded terrorists.”
Speaking at the UNSC briefing on Ukraine ‘Fight against impunity’, the minister said politics should never ever provide cover to evade accountability.

“Nor indeed to facilitate impunity. Regrettably, we have seen this of late in this very chamber, when it comes to sanctioning some of the world’s most dreaded terrorists.”

“If egregious attacks committed in broad daylight are left unpunished, this Council must reflect on the signals we are sending on impunity. There must be consistency if we are to ensure credibility,” he added.

India and China’s relations deteriorated after the Galwan valley clash. Recently, on September 13 completed the disengagement process in the Gogra Heights-Hot Springs area near Patrolling Point-15 in the eastern Ladakh sector, according to government sources.

The two sides have also completed verification of each other’s positions adapter pulling back troops from friction point.

India and China have been engaged in a standoff since April-May 2020 over the transgressions by the Chinese Army in multiple areas including the Finger area, Galwan Valley, Hot springs, and Kongrung Nala. The situation worsened after violent clashes with Chinese troops in Galwan Valley in June 2020.