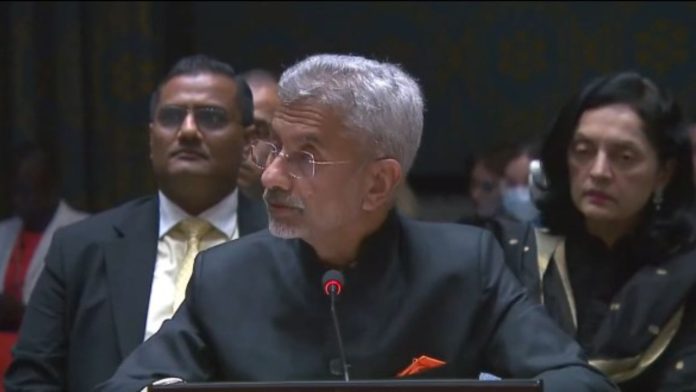 New York: External Affairs Minister S Jaishankar on Thursday while speaking at the UNSC briefing said that the Ukraine conflict is a matter of profound concern for the entire international community.

EAM S Jaishankar while talking about Ukraine said that the need of the hour is to end the conflict in Ukraine and return to the negotiating table.

He further recalled PM Modi’s remarks concerning the conflict during his meeting with Russian President Vladimir Putin on the sideline of the SCO Summit.

He further added that “India is strongly reiterating the need for an immediate cessation of all hostilities and a return to dialogue and diplomacy. Clearly, as Prime Minister Narendra Modi has emphasised, this cannot be an era of war,”.

He further raised concern over the pain and impact faced by the ‘Global South’ community. He said that “The Security Council must send an unambiguous and unequivocal message on this count. Politics should never ever provide cover to evade accountability. Nor indeed to facilitate impunity. Regrettably, we have seen this of late in this very Chamber, when it comes to sanctioning some of the world’s most dreaded terrorists.”

He further added that “If egregious attacks committed in broad daylight are left unpunished, this Council must reflect on the signals we are sending on impunity. There must be consistency if we are to ensure credibility,”.