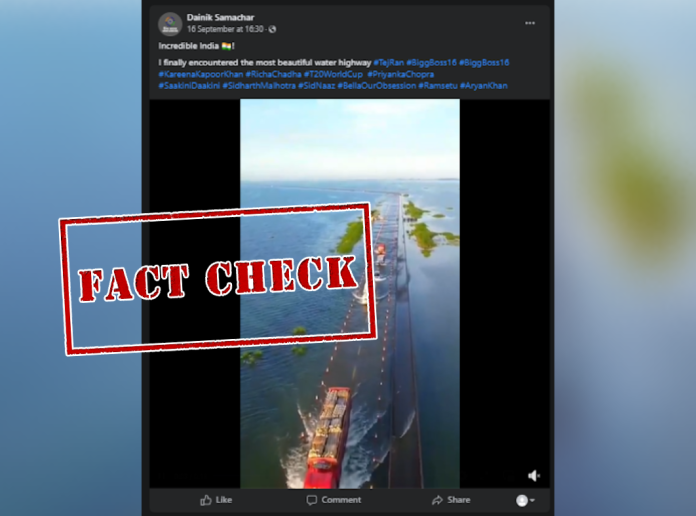 A video showing an aerial view of a water highway has been doing the rounds on social media. Vehicles can be seen moving on a flooded road with water all around. Many social media users claim it to be from India. 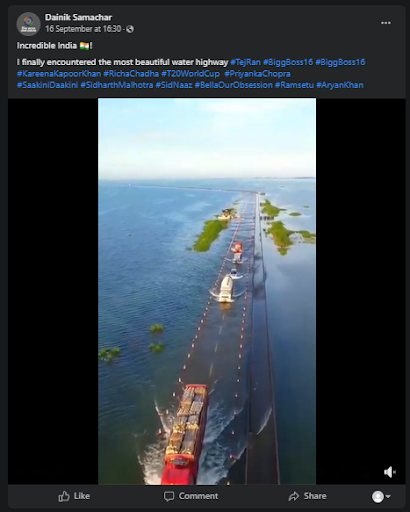 When NewsMobile fact-checked the viral image, it was found to be misleading.

A Reverse Image Search of the viral video led us to a tweet, posted on July 10, 2021, by a verified account — Beautiful China — official handle of the country’s largest newspaper group. The video in the tweet matches exactly with the viral video, and the caption says that the road in the video is a section of Yongxiu-Wucheng road. This part of the road gets submerged during the monsoon season when the water level exceeds 18.67m.

Take a drive on “road underwater” in E China’s Jiangxi! A section of Yongxiu-Wucheng Road is submerged in water during flood season when the water level exceeds 18.67 meters #AmazingChina pic.twitter.com/NJK9delnkq

Conducting a Google Keyword Search about the ‘Yongxiu-Wucheng road’, we traced a  tweet by China Central Television (CCTV), dated August 5, 2019, showing images of the same road when the water level recedes, proving that the road, indeed, submerges during the monsoon season.

The Yongxiu-Wucheng Road in East China’s Jiangxi province emerged after the water declined. The 5.05 km long road stretches across China’s largest freshwater lake and is named as China’s “most beautiful highway on water”. #SeeChina #HiChina pic.twitter.com/T8gaoT38uf

Another tweet by China’s state-affiliated media house — People’s Daily, published on June 26, 2022, showing visuals from the same road during the monsoon season.

Therefore, we can conclusively say that the claim of the viral video is misleading.