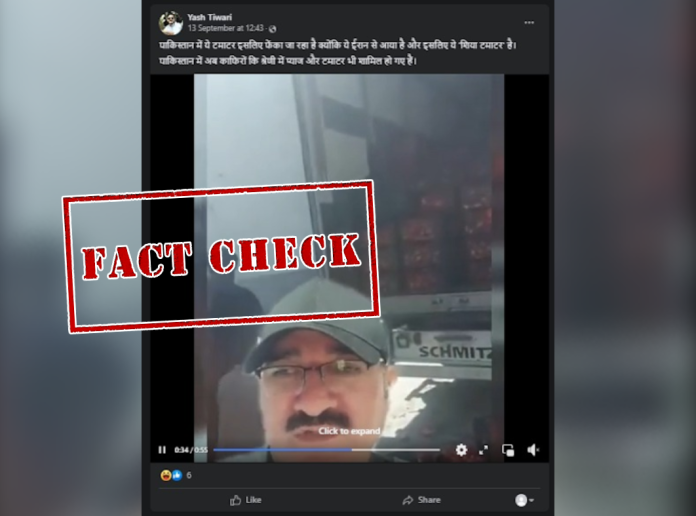 A 55-second video showing a group of men throwing away crates of vegetables from a truck is doing rounds on social media. The narrator in the video says that the visuals are from Pakistan and these people are throwing away onions and tomatoes since they have come in from Iran and that they are Shia vegetables.

(English Translation: This tomato is being thrown in Pakistan because it has come from Iran and hence it is a ‘Shia tomato’. In Pakistan, now onions and tomatoes have also been included in the category of infidels.) 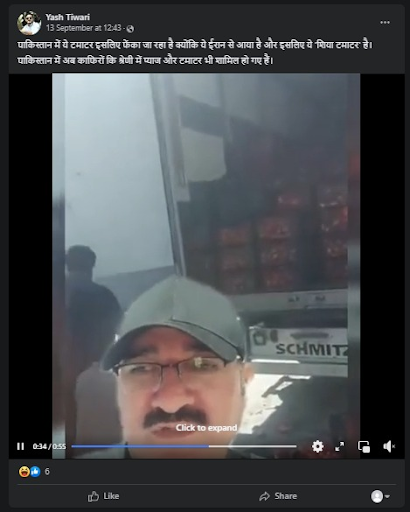 Running a Google Keyword Search for the video led us to a Hindustan Times news report titled: Viral: Pakistanis loot and destroy tomatoes imported from Iran. Here is why, published online on September 11, 2022. The visuals in the video report match exactly with the viral video. 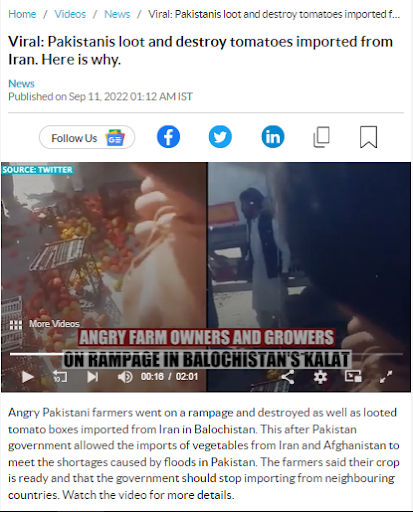 The report states that the incident happened in the Kalat district of Balochistan when local farmers of the area destroyed and looted crates of vegetables that the district received from Iran as aid following devastating floods in the region. The farmers were doing so as a sign of protest against the government for importing vegetables from other countries rather than purchasing from them. According to farmers, their crops were ready, and yet the government sought help from Iran.

Searching further about the incident, we came across a video report on YouTube by a Pakistani news channel Geo News, titled: Geo News Headlines 4 AM | Imported Tomatoes destroyed by locals | Sindh Flood Update | 10 Sep 2022, published on September 10, 2022, on their official YouTube channel. Here too, the keyframes starting at 13:46 match with the viral video.

The report further informs us that the man behind the incident has been arrested from Mangchar area in Kalat and that further investigation is underway. The police are conducting raids to find other suspects in the case.

Finally, we came across a September 10, 2022 tweet by Murtaza Solangi, executive editor at Nayadaur Media – a Pakistani media house. The journalist further clarified that the video went viral with wrong claims and that the actual reason for this was the agitation of the farmers against the government. 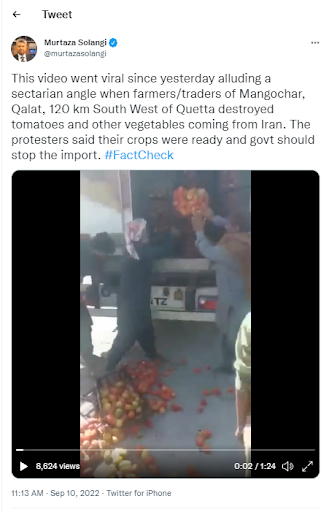 We could not find a single source to confirm the fact that these vegetables were ‘Shia’ which is why farmers were throwing them away.

Therefore, based on our investigation we can conclusively say that the viral video showing farmers in Pakistan throwing away crates of vegetables is being shared with a misleading claim.