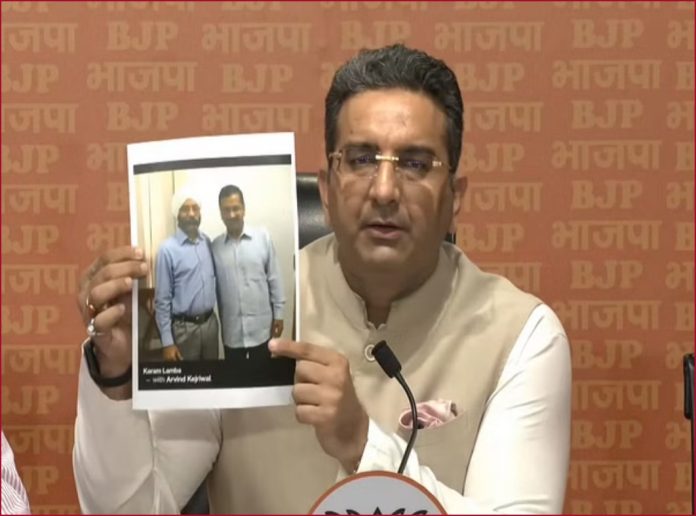 New Delhi: With the endless war of words between the Aam Aadmi Party and the Centre over the alleged liquor scam in Delhi, the Bharatiya Janata Party on Tuesday leveled a fresh set of allegations at the ruling party in the national capital.

Addressing a press conference, BJP spokesperson Gaurav Bhatia alleged that the AAP gave the liquor contract to its candidate Karanjit Singh Lamba while “ignoring all the rules.”

“It has become clear from the sting operation how Arvind Kejriwal makes a recovery. How they earn black money and how people are looted. Delhi government gave L7 licenses to universal distributors. One of universal distributors partner is Charanjit Singh Lamba, a close aide of Kejriwal, CR park ward candidate of AAP,” he alleged.

Bhatia claimed that no transparency was maintained in the implementation of the new excise police (which now stands scrapped), and asked if Kejriwal did not get money from the “backdoor.”

“Out of the written off Rs 144 crores, Rs 66 crores belonged to KS Lamba. No transparency. Their only motive is dishonesty. We want to ask Kejriwal, did he not get money from the back door? When Arvind Kejriwal makes a statement, there are no facts and evidence in it. But when the Bharatiya Janata Party puts forth any point, it keeps it with proof. That’s why Kejriwal doesn’t answer a single question,” he said.

The BJP further sought answers from the Chief Minister and Manish Sisodia who heads the Excise Department, asking “why they were distributing revadis of corruption to their close ones? To whom you give a certificate that he is honest, that person is behind the bars of the jail, why?” Bhatia asked.

Delhi BJP chief Adesh Gupta alleged that Kejriwal got “half the percentage of the commission which was increased.”

“It has become clear from the disclosure why that liquor policy was made? Because Kejriwal got half the percentage of the commission which was increased,” he said.