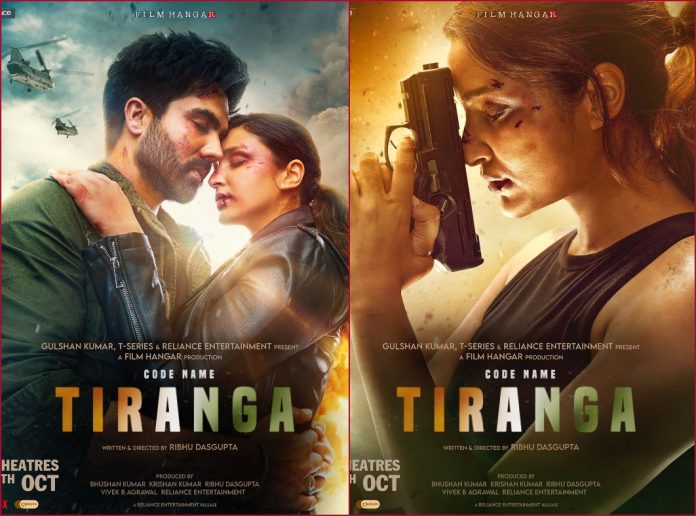 In the first picture, Parineeti can be seen holding a gun as she closes her eyes and in another poster, she can be seen close to Harrdy Sandhu in the backdrop of what looks like a war. The actress took to her social media and shared her first looks.

Sharing the posters, Parineeti wrote, “NATION. LOVE. SACRIFICE. #CodeNameTiranga Excited to be collaborating my fav punjabi boii @harrdysandhu on this one (sic).” Harrdy Sandhu also shared the same posters on his Instagram handle.

A spy on an unfaltering and daring mission for her country in a race against time where she has no other option than to make a sacrifice is the theme of the espionage action thriller “Code Name: Tiranga.”

Parineeti Chopra will play a RAW agent in the film who embarks on an exciting journey through different countries. Contrastingly, Harrdy Sandhu will play the part of a well-known and in-demand singer.

Along with Parineeti and Harrdy, the movie also stars Sharad Kelkar, Rajit Kapur, Dibyendu Bhattacharya, Shishir Sharma, Sabyasachi Chakraborty, and Deesh Mariwala, all of whom have extensive acting experience.