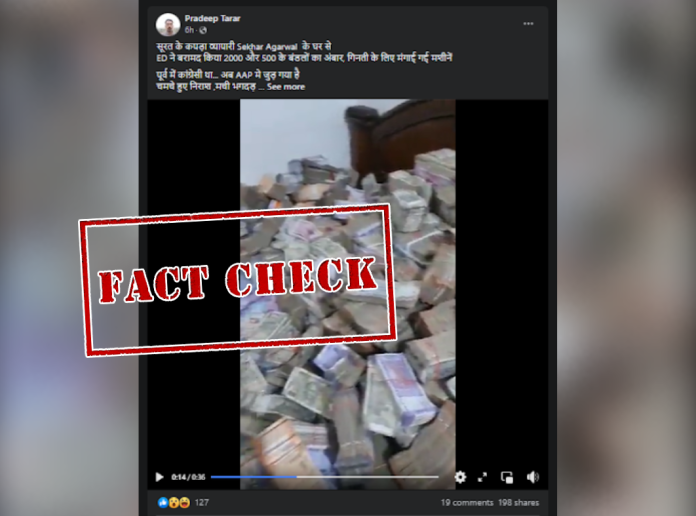 A 36-second video showing a group of people counting heaps of cash is being widely shared on social media. Many users are sharing the viral video claiming that it is Surat-based businessman Sekhar Agarwal’s residence and the raid is being conducted by Enforcement Directorate. Many users are also claiming that Agarwal was earlier in the Congress and has now shifted his allegiance to the Aam Aadmi Party.

A Facebook user posted the viral video with the caption:

(English Translation: From the house of Surat-based textile merchant Sekhar Agarwal ED recovered bundles of 2000 and 500, machines called for counting Was Congress in the past… now has joined AAP Disappointed, a stampede #corruption_of_the_end_near) 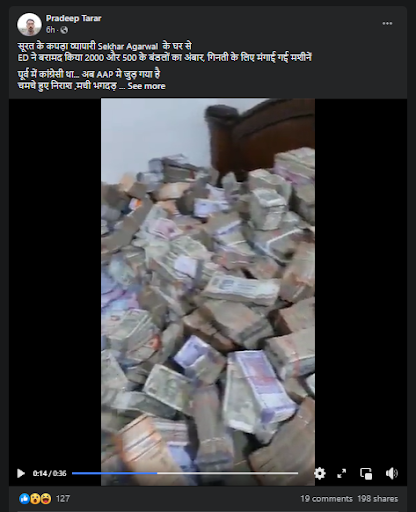 To verify the claim we conducted a Google Keyword Search about the ED raid on a Gujarat businessman Sekhar Agarwal. Our search yielded no results. Moving on, we conducted a Reverse Image Search of the video keyframes and found a September 11, 2022, YouTube shorts video posted on the official channel of CNN-News 18. 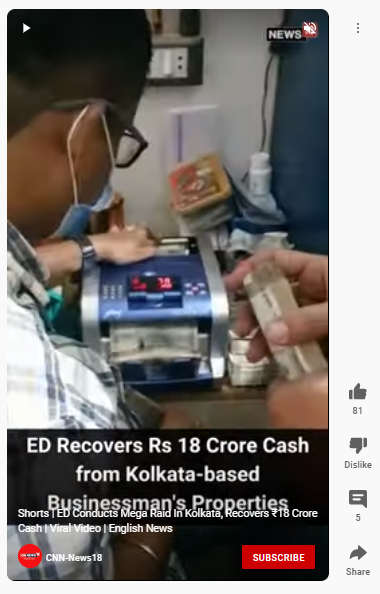 The video keyframes match exactly with the viral clip and the description informs us that the video is from an ED raid conducted in a Kolkata-based businessman’s properties. Around Rs 18 crore cash was recovered by the ED during the raid.

Taking a cue from this we conducted another keyword search with relevant keywords. Our search led us to a September 10, 2022, YouTube news report titled: Heaps Of Cash Found At Kolkata Firm In Raid, Counting Machines Busy published on the official channel of NDTV.

Here too, the video shown in the news report matches exactly with the viral video. Watching the news report we get to know that ED conducted raids in 6 different properties belonging to a Kolkata businessman who, along with his family, defrauded people through a gaming app.

Finally, we found a news report titled: ‘Kolkata: Rs 17 crore  found during ED raid on home of gaming app operator’ published online in The Times of India, on September 11, 2022. The news article states that the accused is Aamir Khan, promoter of a gaming app called E-nuggets. Khan allegedly lured users to his gaming app and then defrauded them and the money recovered is what he has collected by cheating them. 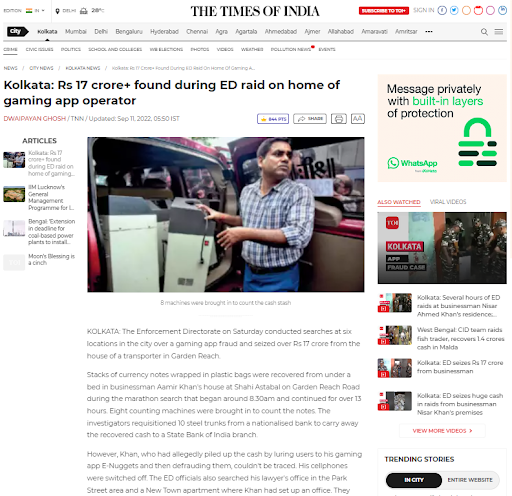 We could not find any relation of the viral video to any Surat businessman named Sekhar Agarwal, let alone his affiliations with political parties. Therefore, based on our investigation we can conclusively say that the viral video claiming ED raid on a Surat businessman’s house is misleading. The name Sekhar Agarwal is fictional and so is his affiliation with Congress and AAP.