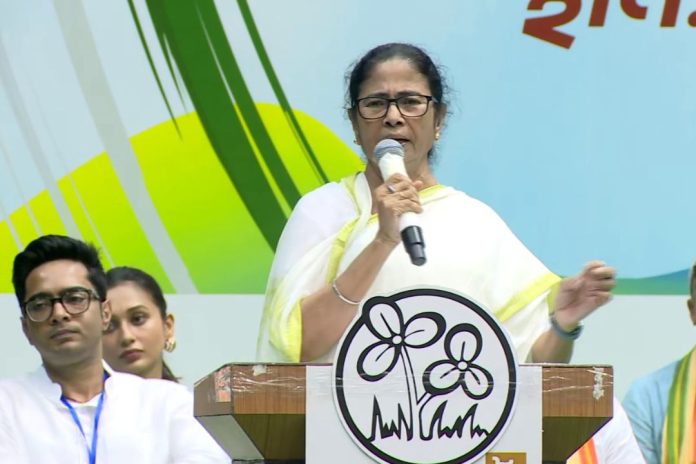 Kolkata: West Bengal Chief Minister Mamata Banerjee on Thursday claimed to join hands with the opposition parties to fight against the Bharatiya Janata Party in the upcoming 2024 Lok Sabha Election.

While talking at an event TMC supremo said that “In 2024 we will play a game that will start from Bengal. Hemant (Soren), Akhilesh (Yadav), Nitish (Kumar), I and other friends will unite then. How will they (BJP) form the government then? There’s no need for the BJP government.”

She further added that “All opposition parties will join hands to defeat the BJP. All of us will be on one side and the BJP on the other.”

She further reiterated the 2021 state election slogan “Khela Hobe”. Talking about the recent visit of Bangladesh Prime Minister Sheikh Hasina to India and added that “This is the first time the PM of Bangladesh came to India & did not come to Bengal despite her desire to meet me. I don’t know why they (BJP) are so angry?”

She further hit out at the BJP government for unveiling a statue of Netaji Subhash Chandra Bose at India Gate. She added that “I feel bad they’re now making a Netaji Statue in Delhi. What about the statue present before? I received a letter from an under secretary stating the PM will inaugurate the statue today and you be there before the event commences. Am I their bonded labor?”

Prime Minister Narendra Modi will unveil the statue and the developed Kartavya Path on Thursday.