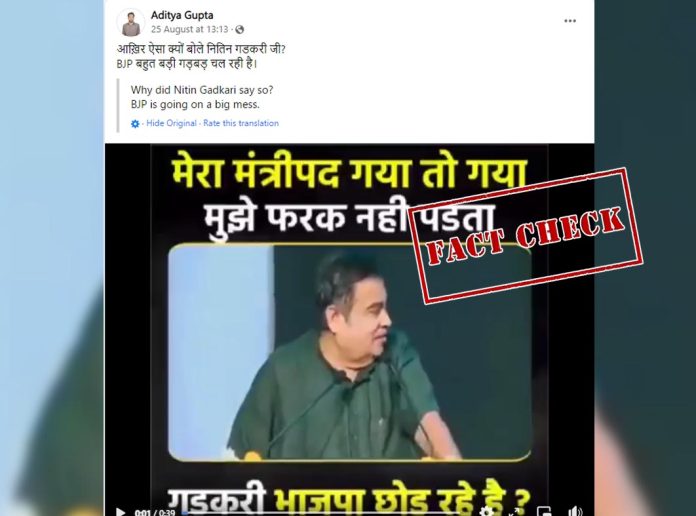 After Union Minister Nitin Gadkari was dropped from the BJP Parliamentary Board, a video started making rounds on social media. In the video, Gadkari can be heard saying that he does not care if he loses his position. 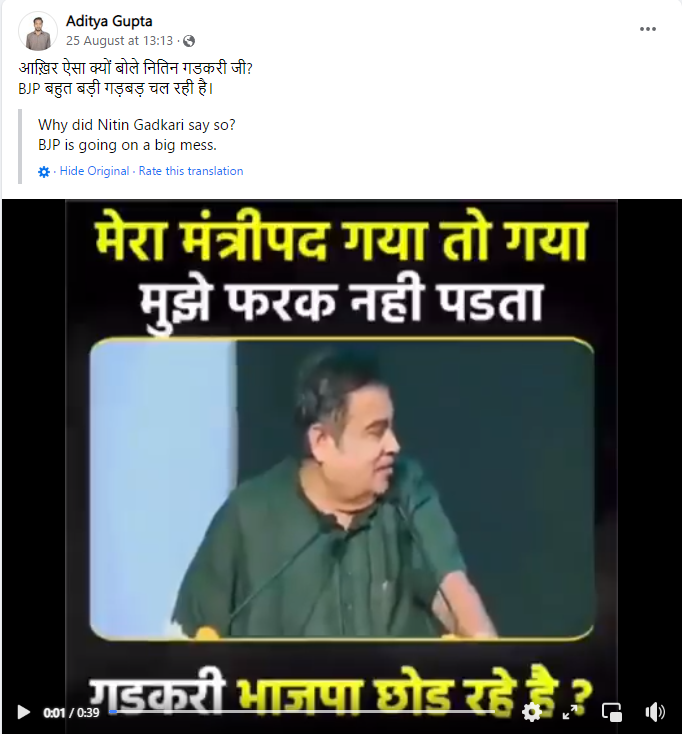 On running a keyword search, we found a tweet by Nitin Gadkari dated August 25, 2022. In the tweet, he said that the original video is being shared without any context to spread false information. 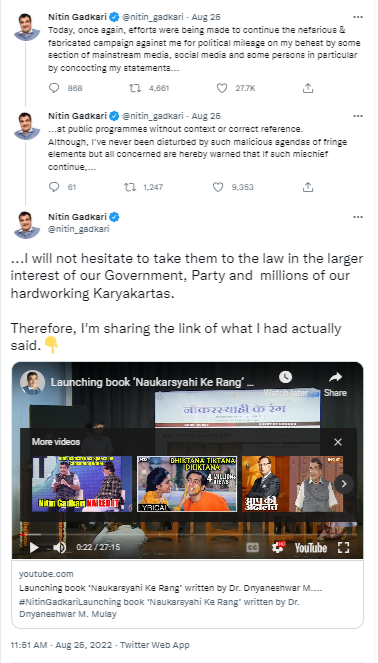 In the tweet thread, he also shared the link to the full original speech that was streamed live on August 23, 2022. The video was titled: Launching book ‘Naukarsyahi Ke Rang’ written by Dr Dnyaneshwar M. Mulay | Nitin Gadkari

After watching the video carefully, we noticed that his statements from different segments have been edited together to create the viral video.

The viral line has been taken from the 7:28 min of the original video when he reminisces about an incident from 1996-97 while he was the PWD minister in the Manohar Joshi government in Maharashtra.

Gadkari narrates an incident about Melghat in the Amravati district where 2,500 children died due to malnutrition. This sparked international outrage. Concerned, the then Chief Minister Manohar Joshi asked that there were 450 villages in Melghat, but not a single one of them had a road, so what could be done about this situation? He further narrated that the Chief Conservator Forests said that due to the rules stipulated under the Environment Act, roads were not being built in the village. This was the reason there was no electricity, and children could not even attend school.

Taking the matter in his own hand, Gadkari said, “I said, Sir, this is not your business. I am an expert in this kind of work. So do one thing, let me handle it. I don’t care what the consequences are. And I will do it. If you can, then stand behind me, otherwise, it doesn’t matter. It doesn’t matter if I lose my post. That’s not a concern…”.

Moreover, we found that another line has been taken from 19:18 min of the video. Talking about his book, Gadkari says that he is an ordinary person who eats from roadside stalls and watches movies from the third class section.

Hence, from the above fact check, it is clear that the video in circulation is manipulated and is being shared with a misleading claim.