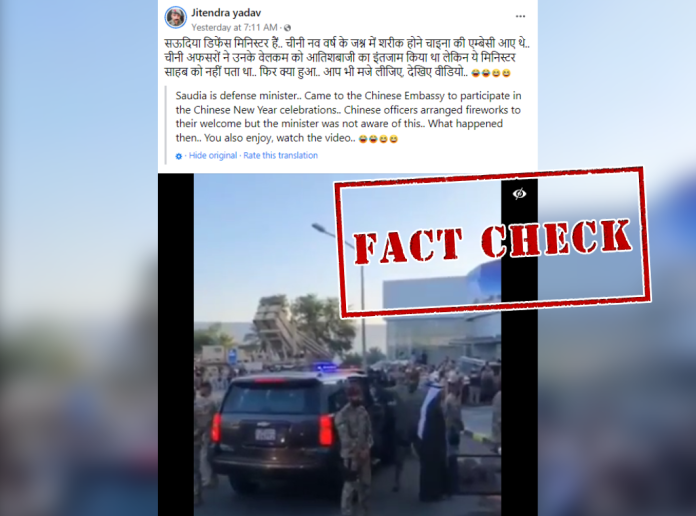 A video is being widely shared on social media with a claim that during a visit to the Chinese Embassy, Saudi Arabia’s Defence Minister and his wife were startled by abrupt fireworks.

(English translation: Saudia’s Defence Minister…came to the Chinese Embassy to participate in the Chinese New Year celebrations. Chinese officers arranged fireworks for their welcome but the minister was not aware of this. What happened then? You also enjoy, watching the video) 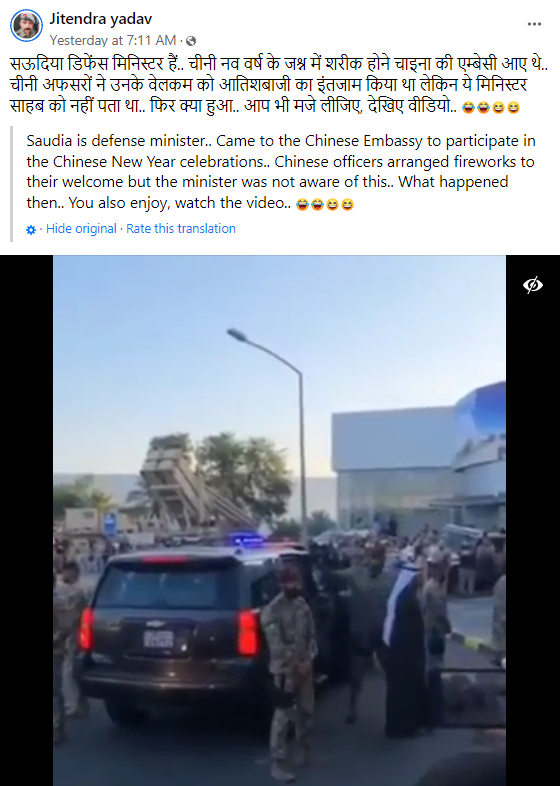 Using the InVid Tool, we extracted keyframes from the viral video and performed a Reverse Image Search. This search directed us to a verified Facebook account of an Arabic news outlet that carried the same viral video on December 13, 2019. The caption can be translated in English to, “Military exercise for personal guards in the State of Kuwait.”

We next performed a Google search for “Kuwait Army” and found the Kuwait Army’s official Instagram profile. When we looked for pictures from 2019 on its page, we discovered that Kuwait Army’s Instagram account had posted images of the same event on December 16, 2019. Aerial footage from the video depicts a cavalcade pulling up to a location with images of numerous Arab officials. In the video, a man welcoming another man wearing traditional Arabic clothing is also seen.

The caption can be translated in English to, “Part of the Amiri Guard’s display that was carried out during the 5th Gulf Defense and Aviation Exhibition, which was held from 10 to 12 December 2019 at the Mishref fairground.”

Taking a cue from this, we searched further and found that the event was covered by many news outlets, including the Kuwait Times,  in December 2019. The report read, “Two hundred and twelve leading international companies in the fields of defence and armament from 32 countries are participating in the 5th Gulf Defense and Aerospace (GDA) exhibition and conference, which kicked off yesterday in Kuwait.”

Thus, it is evident from the above information that an old video from Gulf’s Defence and Aviation exhibition is being shared with false claims.