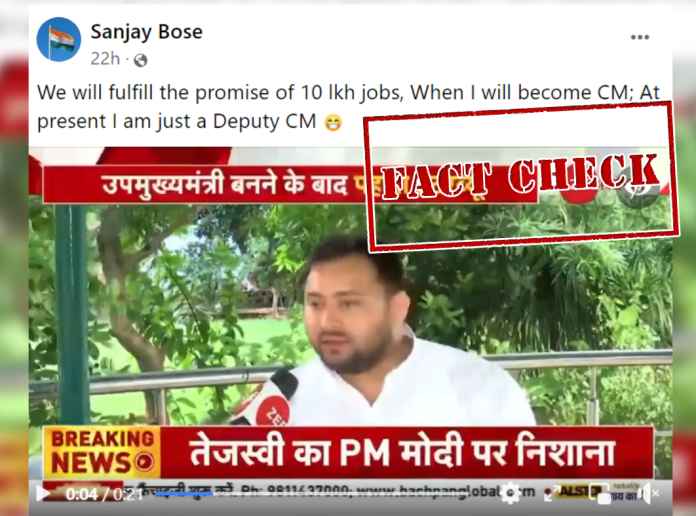 A video of Bihar Deputy Chief Minister Tejashwi Yadav is widely shared on social media, claiming that the previous pledge of 10 lakh jobs was contingent on him becoming the chief minister of Bihar rather than the deputy chief minister.

The assertion was made in the midst of the Bihar political crisis, which saw Nitish Kumar team up with the Yadav-led Rashtriya Janata Dal and other parties to force the Bharatiya Janata Party out of state government. Before the 2020 elections, when Yadav addressed the rising unemployment rate in the state and the nation as a whole, the RJD pledged to create 10 lakh jobs.

The video is shared on Facebook with a caption: “We will fulfil the promise of 10 lakh jobs when I will become CM; At present, I am just a deputy CM.” 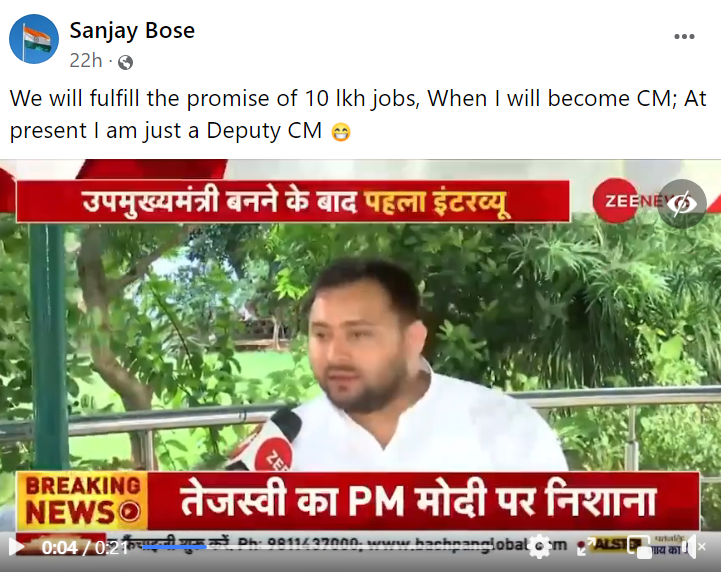 Performing a Reverse Image Search with relevant keywords, we found a news report published by Zee News, dated August 12, 2022. In the full interview, Yadav discusses the RJD’s pledge to create 10 lakh jobs before the 2020 Bihar state legislative elections. And this interview is also available on the news channel’s official YouTube account.

The part of the clip that is widely shared on social media is between 0.52 and 1.11 minutes. The video has been cut off exactly after Yadav reveals his conversation with Chief Minister Nitish Kumar and his assurance that his commitment will be kept.

Tejashwi Yadav himself has described this video as edited and shared the video containing his entire statement.

Thus, it is now clear that the edited version of the video with the accusation that Tejashwi Yadav is breaking his word and misleading the Bihar people is widely shared.