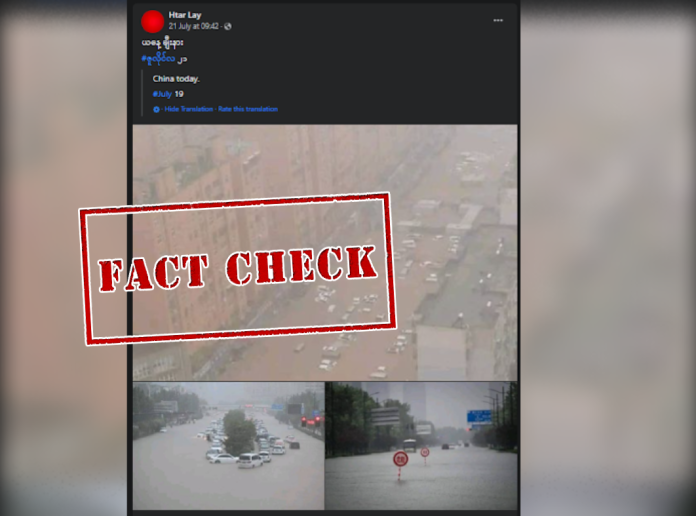 The western regions of China suffered badly due to the occurrence of flash floods in July 2022. Sichuan and Gansu provinces were the most-affected as many areas received more than double the monthly rainfall in just two days. The catastrophe left at least 12 dead and many more missing.

Against this backdrop, various images of flooded streets of the country have been doing the rounds on social media. Many social media users claim that it is about the recent floods in China. 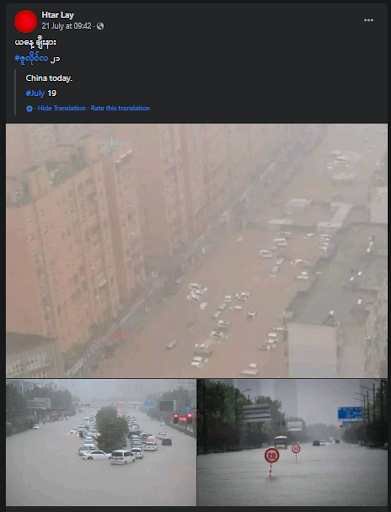 NewsMobile fact-checked the viral claim, and found it to be misleading.

Through a Reverse Image Search, we checked each image for its authenticity.

Our search led us to a July 21, 2021 tweet by UN Climate Change’s Twitter account. The caption on the tweet reads: “Dramatic climate impacts continue around the world. Zhengzhou in China has seen the highest daily rainfall since weather records began, receiving the equivalent of 8 months of rain in a single day  #COP26”

Indicating that the picture is from Zhengzhou, China, from the year 2021.

Dramatic climate impacts continue around the world. Zhengzhou in China has seen the highest daily rainfall since weather records began, receiving the equivalent of 8 months of rain in a single day. #COP26 pic.twitter.com/7dtyHLUD6J

Searching further for the image, we found a July 20, 2021 tweet by Rita Bai Yunyi (@RitaBai), a journalist at Chinese news organisation Global Times.

How terrible is the rainfall in #China? In the past few days, #Germany encountered the largest rainstorm recorded in 75 years. Cologne has 154 mm of rainfall in 24 hours (note: it is 24 hours!), while the rainfall in Zhengzhou today is 200 mm in 1 hour! Disaster-level #floods! pic.twitter.com/KSxcxy2vT7

She tweeted an entire thread about the devastation made by continuous rainfall in China and other parts of the world. This tweet talks about the heavy rainfall in Zhengzhou, China, crossing a figure of 200mm in just 1 hour.

The viral image matches exactly to both the tweets.

The description of the photo reads: “ZHENGZHOU, CHINA – JULY 20: Vehicles are stranded in floodwater near Zhengzhou Railway Station on July 20, 2021, in Zhengzhou, Henan Province of China. Torrential rains hit Henan since July 16, causing floods in many parts of the province on Monday and Tuesday. (Photo by Zhu Zhe/VCG via Getty Images).

Thereby, confirming that this July 2021 image is from Zhengzhou, China. 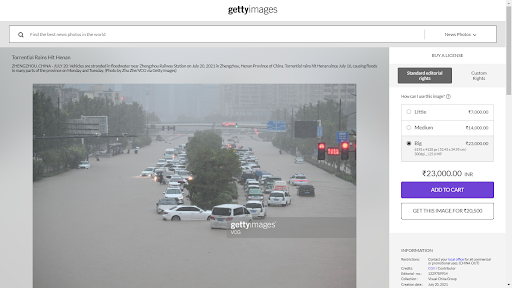 A side-by-side comparison of both the images can be seen below:

Moving on to the third picture, we found out that the viral image has been taken from a July 21, 2021 news report titled: ’China raises emergency response to second-highest level as downpours, flooding continue’, published by a Chinese news agency named Xinhua.

The title of the video reads: Danger signs are installed on a waterlogged road in Zhengzhou, capital of central China’s Henan Province, July 20, 2021. (Photo by Hou Jianxun/Xinhua)

Therefore, confirming that this image, too, is from July 2021, from Zhengzhou in the Henan province of China. 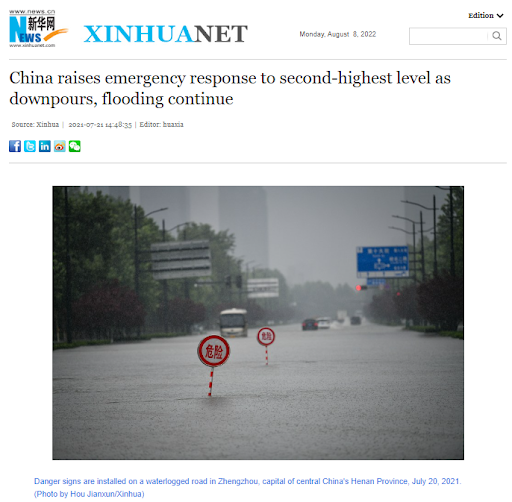 A side-by-side comparison of both the images can be seen below:

Also, the July 2021 floods in Zhengzhou — the capital city of Henan province in China — had been covered by many prominent media houses worldwide like NPR, Aljazeera, Independent, and Reuters to name a few. According to these reports, the floods in the entire province killed around 398 people and caused more than $10 billion worth of economic losses.

Therefore, we can conclusively say that the viral images from China are not recent and shared with misleading claims.