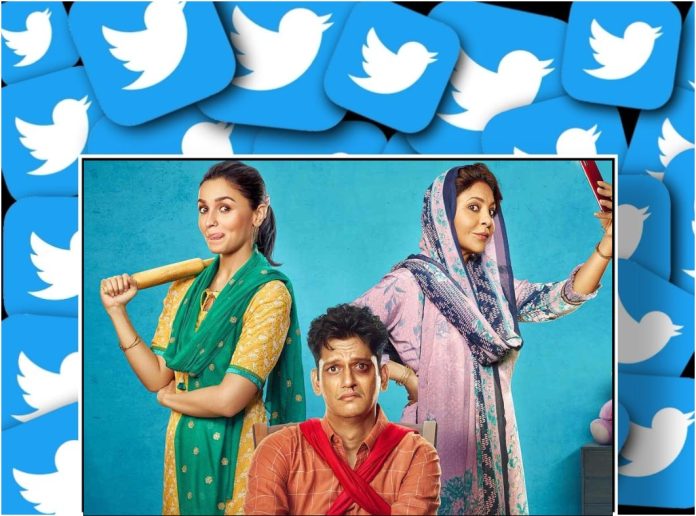 ‘Darlings’ was released on Netflix on Friday and have thoroughly hooked viewers with its amazing plot and great cast.

Young couple Alia Bhatt and Vijay Verma portray a rocky marriage. While Hamza, played by Vijay Verma, is a raving alcoholic who can’t control his anger and beats his wife every other night, Badru, played by Alia Bhat, is naïve and wishes for a future with him. Shamzi, Badru’s mother, Shefali Shah, lives across from them and constantly tells her daughter to leave him, but the daughter is hopeful to improve the situation.

The situation gets worse when Zulfi (Roshan Mathew), a neighbour, goes to the police and reports Hamza for domestic violence.

The film is cleverly written by Parveen Sheikh, a serious issue of domestic violence which Bollywood has seen enough times has given a smart twist with dark comedy. Thus, ‘Darlings’ stands out of the box.

Netizens admitted ‘Darlings’ is a refreshing watch, taking to Twitter, Some called it an average satire, while others remarked it was “thoroughly entertaining.”

Manifest a pertinent message on domestic violence by fusing humor & thrill in the narrative but screenplay gets stretched towards last 40 mins with unconvincing series of events. Absence of Smart writing & powerful climax makes darlings an average watch. pic.twitter.com/6k0DcdDS4m

And sending some ❤️back to yous too #Darlings . (I saw it tonight …. whatttay film. Still getting over this kadak entertainer … apun ke type ki fillum ) . Kal aur bataoonga. .@NetflixIndia .@RedChilliesEnt thanks yous. https://t.co/FanooMY5Fm

What is it that @aliaa08 and @ShefaliShah_ can’t do? Just finished watching “Darlings” and it is hands down the best Hindi movie I’ve watched this year. #Darlings What cracker performances by them both, and of course not to forget @MrVijayVarma and @roshanmathew22 ! Brilliant!

#Darlings is a wholesome pakage dude !! 🫡 Salute @aliaa08 you are always on point love you infinite
And @NetflixIndia you are thanked to pull out a sensitive topic and making a part of flim.
No one should be a victim of #DomesticViolence. #DarlingsOnNetflix #DarlingsReview pic.twitter.com/x6VkuxT2tR

just finished watching darlings and i have no words! direction, storytelling, acting, narration – everything about this movie was on point! alia bhatt just keeps getting better with every project 😩♥️ #darlings pic.twitter.com/dDpXbfrnW1

Sure, @aliaa08 is incredibly privileged and born with a silver spoon, but look at her craft man. She’s talented, versatile, hard working, and just keeps upping her game with each of her films. #Darlings

#Darlings, a refreshing take on the supposed ever after & where 2 women take charge of their destiny!@aliaa08, u are a magician. @ShefaliShah_ is a powerhouse of talent. @MrVijayVarma no one can match your acting prowess.