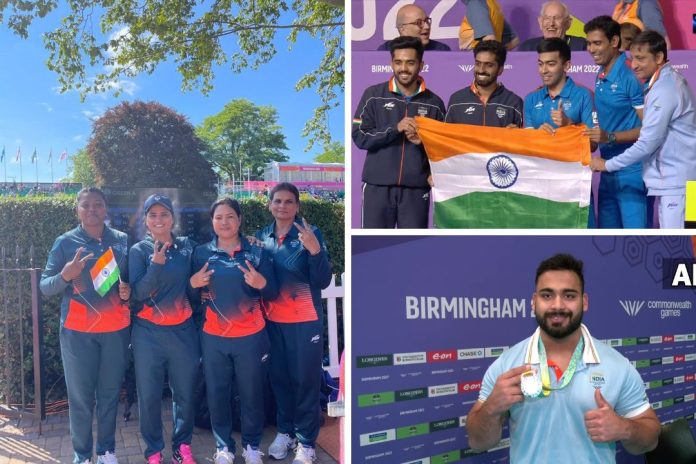 Birmingham: In the ongoing Commonwealth Games, India has kickstarted the campaign of this season by achieving a glorious fleet. India has swiftly bagged a total of twelve medals including five gold, four silver, and three bronze.

Indian Weightlifter Vikas Thakur clinched a silver medal in the Men’s 96kg category. He lifted a total of 346 kg.

Earlier on Monday, Indian weightlifter Harjinder Kaur clinched a bronze medal in the Women’s 71kg finals. She lifted a combined weight of 212kg in the event.

Weightlifter Achinta Sheuli (73kg) clinched the gold medal by totaling 313 kgs on Sunday, raising the tally of medals for the country.

Earlier this week, Jeremy Lalrinnunga set a record-breaking feat in the Men’s 67 kg in a snatch event with the best lift of 140kg winning gold in his debut stance in the ongoing Commonwealth Games.

Indian Weightlifter Mirabai Chanu secured gold in the Women’s 49 kg Category on Saturday. She lifted a total of 201kgs including a personal best of 88kg in snatch, to win the contest by some margin.

Sanket in the Men’s 55kg class when, with an injured shoulder in the end, he went down to Malaysia’s Mohamad Aniq Bin Kasdan by just 1kg. Sanket lifted 113 in snatch and 135kg in clean and jerk for a total lift to 248kgs.

Gururaj Poojary bagged the bronze medal in the Men’s 61kg category. He lifted 269kgs overall to edge out Canada’s Youri Simrad by one in a nail-biting contest.

The Indian Women’s Cricket team is back in the winning ways as they defeated Pakistan by eight wickets at Edgbaston. Smriti Mandhana played an outstanding knock of 63 runs in the last game. India is all set to face Barbados in the upcoming games ahead of the qualifying rounds.

The Indian Men’s Hockey team also began their campaign on day three of competitions, notching up an ever more dominant and fluent 11-0 win over Ghana.

India further secures a silver medal as they move to finals in Lawn Bowls Women’s by defeating New Zealand.