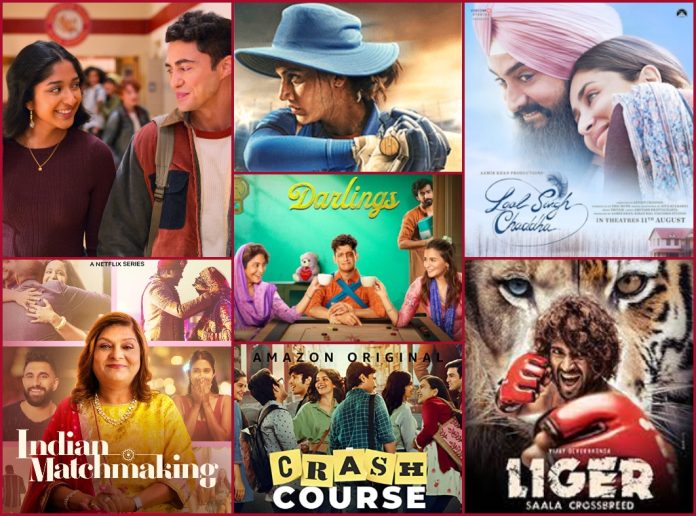 Are you feeling bored? Or are you stressed about work? Or maybe your schedule is too packed? One of the simplest ways to find entertainment is to open your laptop and log in to your favorite OTT channel.

Treat yourself to some thriller, drama, documentary, or comedy.

We have a perfect list of OTT shows and movies that will be released in August.

The movie stars very talented actors, Alia Bhatt, Shefali Shah, Vijay Verma, and Roshan Mathew in the lead. Darlings seem to be a dark comedy by the trailer, the plot revolves around revenge for domestic violence.

If you liked Kota Factory, then you’ll like crash course as well. by the trailer, we know it’s a story of a bunch of students who are trying their best to achieve their academic goals, set mostly by parents and society.

Never Have I Ever, Season 3

One of the most loved shows on Netflix is back with season 3. Devi and Paxton, played by Maitreyi and Darren (Dae-ren) have made it official and season 3 is about the drama which it holds.

Watch Never Have Have I Ever on Netflix, releasing on August 12.

Under the label Marvel Comics, She-Hulk is coming out as a movie, story of She-Hulk revolves around Jennifer Walters, the main lead, who has a complicated life, and also happens to be a green, 6-foot-7-inch, superpowered hulk.

Sima aunty is back, once again, with her all the bachelors to get married. The show is a reality show, which helps bachelors to find their life partners. Though the first season did not receive much appreciation but did well to get 1000s of memes out. The show is a good pass time, let’s see how the second season goes.

Streaming On: Zee 5 Streaming Date: August 8 The film It is an action-thriller and features Vidyut Jammwal and Shivaleeka Oberoi in the lead, Sameer and Nargis, Nargis suffers from PTSD, depression and doesn’t trust anyone, while Sameer is trying to save the broken marriage.

Its biographical sports drama on the journey of the iconic cricket player, Mithali Raj, the character is played by Taapsee Pannu.

And Akshay Kumar starrer, Raksha Bandhan , giving a social message, releasing on Rakhi and together with ‘Laal Singh Chaddha,’ August 11.