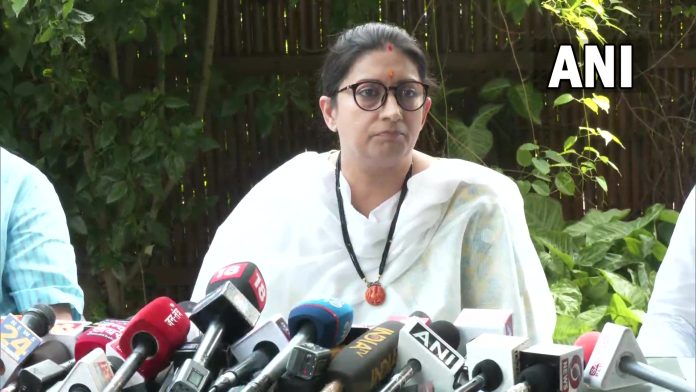 New Delhi: Union Minister Smriti Irani hits back at Congress for accusing her 18-years-old daughter of running an illegal bar in Goa.

Smriti Irani slammed Congress leader Jairam Ramesh and added that “Her character was publicly mutilated by the Congress party and they claim that the mutilation stemmed from a show-cause notice.”

She further questioned Congress for showcasing the name of her daughter in the “papers he flashed”. She further added that the allegations made by Congress on her daughter are “malicious, with the intent not only to assassinate her character but also to politically malign me.”

Union Minister Smriti Irani slammed Congress and accused them of targeting her because “I had the audacity to hold a press conference and question Sonia Gandhi and Rahul Gandhi on the Rs 5,000 crore loot of the Indian treasury.” She further added that her daughter’s only fault is that her mother contested election against Rahul Gandhi from Amethi in 2014 and 2019.

Smriti Irani added that she will take this up to the court of law and further challenged the party that if Rahul Gandhi comes back to fight the Lok Sabha election in 2024 from Amethi, he’ll lose again.