Story Behind Cash Seizure: Is Mamata Banerjee Headed For Hard Times Due To Her Party’s Infighting? | Newsmobile
Wednesday, September 28, 2022 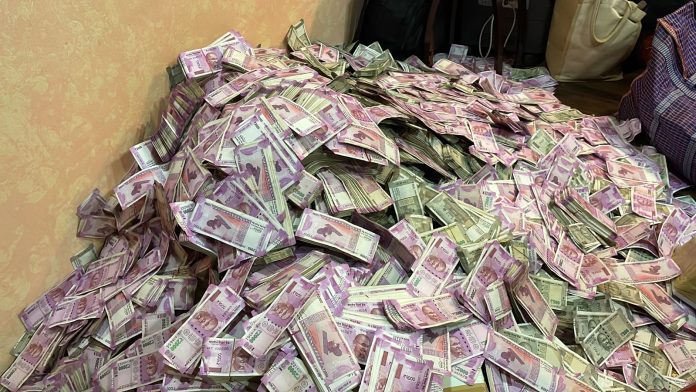 Recovery of bundles of ₹2,000 and ₹500 notes amounting to ₹20 crores by the Enforcement Directorate (ED) in the house of an actor, Arpita Mukherjee, known to be an aide of West Bengal Commerce and Industries Minister Partha Chatterjee in connection with a scam involving recruitment of teachers may only be a tip of an iceberg that has threatened to sink Mamata Banerjee’s Trinamool Congress, which is in the grip of serious infighting over collection of funds.

It is bound to intensify a cold war that has been going on in the Trinamool Congress between two groups on the issue.

The first group comprises old guards of the party like Partha Chatterjee and Transport Minister and Kolkata Mayor, Firhad Hakim. The second group is said to be a relatively younger section that is close to Mamata’s nephew, Trinamool Congress general secretary and Lok Sabha MP Abhishek Banerjee.

Contrary to the belief that the BJP government at the centre is behind the probe, the ED’s money-laundering case is a result of an FIR filed by the CBI, which was filed as per the instructions from the Calcutta High Court.

The Court asked the agency to investigate the alleged scam in the recruitment of Group ‘C’ and ‘D’ staff, assistant teachers of classes 11 and 12 and primary level.

Partha Chatterjee was detained after ED started the on July 23 raids at Arpita Mukherjee’s premise the previous day. Apart from huge amounts of cash, the ED found documents pertaining to around 10 properties, gold and diamond ornaments worth over Rs 50 lakh at Arpita Mukherjee’s house. “The said amount is suspected to be proceeds of crime of the said SSC scam. Several notes were found in an envelope of the West Bengal education ministry with the national emblem printed on them,” ED officials said. Monalisa Das, a professor of Bengali at Kazi Nazrul University, who is also under the ED radar, has links with Partha Chatterjee.

He was an erstwhile education minister when the alleged scam took place. In fact, he was heading the education ministry till 2021. He is no ordinary minister. He is the right-hand man of Mamata whose stock rose as West Bengal general secretary after another leader Mukul Roy left her company to join the BJP. (Roy has since returned to the Trinamool Congress after spending four years in the BJP).

The ED has also conducted raids on Minister of State for Education Paresh Adhikary and MLA Manik Bhattacharya in connection with the alleged scam. Paresh Adhikari had also been interrogated by the CBI.

Since the Calcutta High Court orders have put her leaders in a tight spot, Mamata has maintained silence on the issue while her nephew, Abhishek Banerjee, has asked party leaders to distance .themselves from the latest turn to the case.

Trinamool spokesperson Kunal Ghosh said, “Those who are being named in connection with the case will give their explanations or their lawyers will,” Ghosh said after Abhishek Banerjee decided on the new line.

This is in sharp contrast to Mamata’s approach when the CBI went to the residence of the then Kolkata Police Commissioner in February 2019. Then, she had staged a sit-in at Esplanade that continued for days.

In this case, the High Court ordered a CBI enquiry based on petitions filed by those who were deprived of jobs.

This episode comes after the carnage at Bogtui village in Birbhum district that left nine persons dead on March 21, 2022, in what was a fallout of infighting since both the accused and victims were close associates of the ruling party. At that time, Trinamool Congress’s district President, Anubrata Mondal, and local MLA, Asish Banerjee, had accused each other of providing patronage to Anarul Hossain, a prime accused who was arrested in this connection.

As expected, the BJP has gone on the offensive. BJP leader Suvendu Adhikari posted purported photos of Arpita Mukherjee with Mamata, accusing her of being ‘guilty by association’.

BJP’s IT cell chief Amit Malviya shared the video of Mamata’s interaction with Arpita Mukherjee, who is the face of a famous Durga Puja committee which has links with Partha Chatterjee. Malviyawrote, “Not too long ago, Mamata Banerjee, from an open platform, praised Partha Chaterjee’s close aide, from whose residential premise, ED seized a small sum of 20 crores. Mamata knew of her and the “good work” she was doing. Make no mistake, Partha wasn’t scamming on his own accord.”

Only recently, the CBI filed its first charge sheet in the Bengal coal smuggling case against 41 people, including Anup Majhi, alias Lala, the alleged mastermind, former Trinamool Congress (TMC) leader Vinay Mishra and eight employees of the Eastern Coalfields Limited, agency officials said. The CBI had stated that illegally mined coal, worth several thousand crores of rupees, has been sold in the black market in recent years by a group operating in the western parts of West Bengal where Eastern Coalfields – an arm of state-owned Coal India – operates several mines.

Mamata does find herself fighting a lonely battle as the roles of several TMC leaders including her nephew, Abhishek Banerjee, are under probe. Even anti-BJP parties, the Left and the Congress, are welcoming the CBI and ED probes in a big way against Mamata’s aides– even though they have cried hoarse in probes against Sanjay Raut or Sharad Pawar in Maharashtra or Rajasthan Chief Minister Ashok Gehlot’s brother.

After NDA’s Presidential candidate Droupadi Murmu got a comfortable win over Opposition candidate Yashwant Sinha, Mamata decided to abstain from voting in the Vice President poll, which hugely upset other Opposition parties.

Margaret Alva, the Opposition candidate for the Vice Presidential poll scheduled on August 6, said the Trinamool Congress’ decision to abstain from voting was disappointing, adding that this is not the time for “whataboutery.” She tweeted that “TMC’s decision to abstain from voting in the VP election is disappointing. This isn’t the time for ‘whataboutery’, ego or anger. This is the time for courage, leadership & unity. I believe Mamata, who is the epitome of courage, will stand with the opposition.”

However, Trinamool Congress MP Derek O’Brien said the Congress should view his party as “equal partners” as he objected to the way the joint Opposition candidate for the vice presidential poll was chosen. According to him, his party leaders were informed of the choice barely 20 minutes before the press conference to announce the name was to be held.

It may be recalled that Nationalist Congress Party chief Sharad Pawar, at the time of the announcement of Margaret Alva’s name, said Mamata was not reachable.