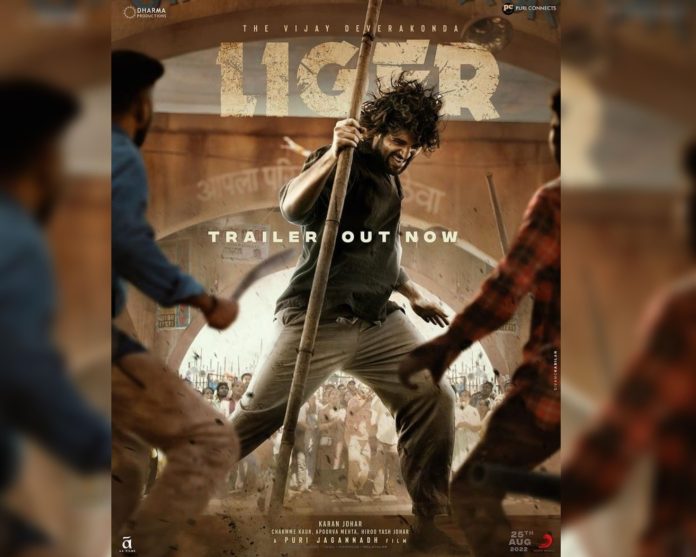 Karan Johar, Ananya Panday and Vijay Deverakonda took it to Instagram post with the film’s motion poster with the caption, “India, We give you Mass, Action, Entertainment. The LIGER Trailer! #LIGER #LigerTrailer Aug 25th Worldwide Release!” They also shared the link in their stories.

The trailer shows Vijay Deverakonda aka Liger coming toward the boxing ring for the fight. Along with this, there is a voiceover of Ramya Krishnan aka mother of Vijay telling the reason behind her son named ‘Liger’. She says “Ek lion aur tiger ki aulaad hai yeh, crossbreed hai mera beta”. It shows the journey of chaiwala, how he struggles to fulfil his dream of representing India and winning the boxing championship. His girlfriend aka Ananya betrays him, though he loves her so much.

Vijay is shown having a stammering problem due to which he faces many problems. Still, he shouts ‘I love you’ expressing his feelings to Ananya. The trailer is full of action, emotions and drama.

The trailer is been released on YouTube in several languages Hindi, Telugu, Malayalam, Tamil and Kannada. The film is been directed by Puri Jagannadh. It is the first time collaboration between Vijay Deverakonda and Puri Jagannadh. The film is all set to hit the theatres on August 25th, 2022.