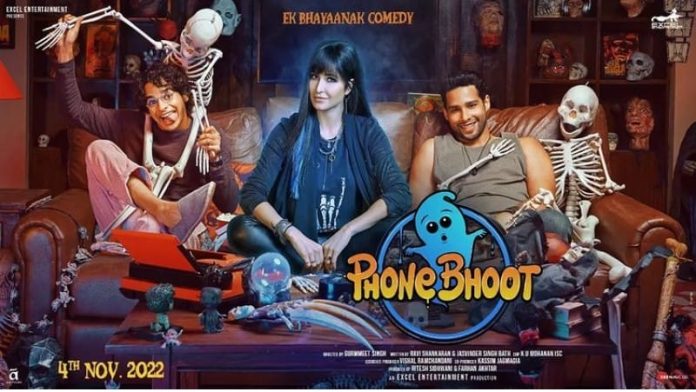 Katrina Kaif took it to Instagram to inform about the new release date of her upcoming film ‘Phone Bhoot’ on Friday.

Katrina posted the poster of the film with the caption, “Ringing in with an update. #PhoneBhoot will now release on 4th November at cinemas near you.”

She also tagged Ishaan Khatter, Siddhant Chaturvedi and Gurmeet Singh who will be seen alongside her.

The motion poster was with the new release date and film called ‘Ek Bhayaanak Comedy’. This will be the first time collaboration of Katrina Kaif alongside Ishaan Khatter and Siddhant Chaturvedi. The film is been directed by Gurmeet Singh of Mirzapur fame and produced by Farhan Akhtar and Ritesh Sidhwani under Excel Entertainment Production.

Earlier, the horror movie was slated to release on October 7 this year though makers postponed it to November 4.

The ‘Phone Bhoot’ will clash with the release of Arjun Kapoor’s starrer ‘Kuttey’. This will be the first project for Katrina Kaif after her marriage to Vicky Kaushal last year.