Uproar Over National Emblem; Here’s What It Is All About | Newsmobile
Monday, December 5, 2022

Home Home Slider Uproar Over National Emblem; Here’s What It Is All About 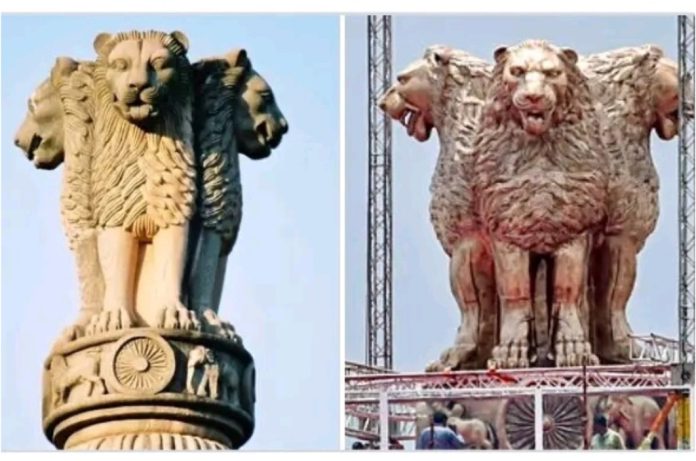 New Delhi: Prime Minister Narendra Modi unveiled the giant national emblem cast atop the new Parliament building on July 11. It was soon criticized by the opposition, and the cast is now the target of national leaders because of its “angry” or “aggressive” expression.

However, the representatives of the central government have since justified the cast, stating that it was carried out after careful research and a well-laid procedure. The facial expressions of the four lions on the national emblem drew harsh criticism from several political figures.

The opposition objected to the unveiling of the national anthem for three reasons: The Prime Minister violated the Indian Constitution by unveiling it, no opposition leader was invited to the event, and secularism was hurt after the PM offered prayers according to the Hindu rituals.

Since July 12, the cast itself has been the focus of intense criticism. Their main concern revolves around the expression of the lions in the national emblem cast on top of the new Parliament building, compared to the original ones at the ‘Lion Capital of Ahsoka’ in Uttar Pradesh’s Sarnath.

There have been allegations that the original lions of the Ashokan Pillar looked peace-loving and sober, while these four lions in the cast look aggressive.

MP Mahua Moitra, from Trinamool Congress (TMC), posted images of two sets of the “Lion Capital of Ashoka” without a caption. The picture of the new cast that Prime Minister Modi unveiled this week is the other one on the left is the old one.

“To completely change the character and nature of the lions on Ashoka’s pillar at Sarnath is nothing but a brazen insult to India’s National Symbol!” wrote Congress national secretary Jairam Ramesh on Twitter.

To completely change the character and nature of the lions on Ashoka’s pillar at Sarnath is nothing but a brazen insult to India’s National Symbol! pic.twitter.com/JJurRmPN6O

The magnificent, peace-loving, calm and glorious lion now looks angry, Cruel, threatening and violent in its new look, almost replicating the hate mongering Ranga Billa and their 8 yrs of treacherous rule…
Can we question Why the Modi govt distorted our #NationalEmblem ? pic.twitter.com/ddjJDKKajz

Ashoka’s lions now bare their fangs? Seems like a new addition by #ModiGovt !

But soon, In a Twitter thread, union housing and urban affairs minister Hardeep Singh Puri claimed that the national emblem cast was “a perfect replica” of the Sarnath Ashoka Lion Capital.

Sense of proportion & perspective.
Beauty is famously regarded as lying in the eyes of the beholder.
So is the case with calm & anger.
The original #Sarnath #Emblem is 1.6 mtr high whereas the emblem on the top of the #NewParliamentBuilding is huge at 6.5 mtrs height. pic.twitter.com/JsAEUSrjtR