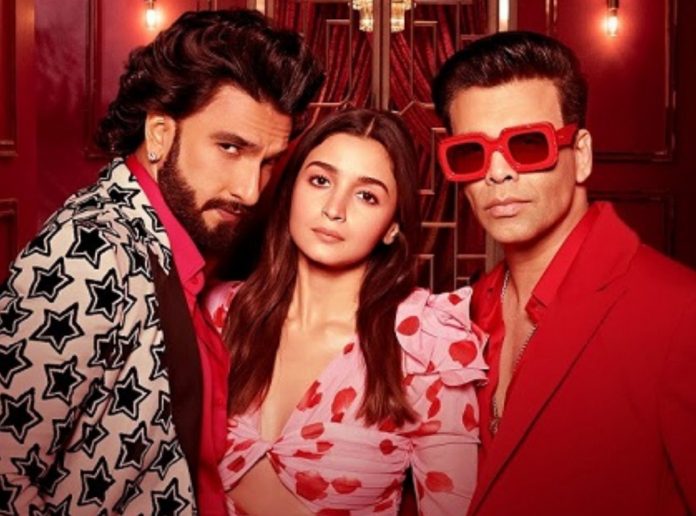 Karan Johar’s Koffee with Karan Season 7 has finally premiered! The infamous chat show’s first episode was dropped on Disney+ Hotstar and Alia Bhatt and Ranveer Singh were the first guests on the chat show.

The guests talked about all sorts of things, from celebrity relationships, supporting their partners and marrying the love of their lives.

Key highlights of the show:

The trio had conversation about how they became close friends. Ranveer and Alia called each other as ‘Sakhis’. Their friendship started on the sets of ‘Gully Boy’. Ranveer also disclosed how he helped Alia for her film ‘Gangubai Kathiawadi’ by making her understand how things works with director Sanjay Leela Bansali. We also saw Alia reveling the emotional side of Ranveer. The actor got emotional and cried after seeing Alia’s proposal photo with Ranbir Kapoor.

During the conversation, K’Jo mentioned that Ranveer is an outstanding mimicry artist and he would do mimicry of any star. Ranveer mentioned that Ajay Devgn is his favourite and called him ‘coolest cat ever’ and also performed his mimicry.

Here the conversation took a turn to Alia’s wedding and memories attached to it. She expressed how much she was impressed with Ranbir Kapoor’s proposal. Alia told KJo that Ranbir proposed her at Masai Mara, Kenya. She praised Ranbir to be a very good planner as he set up their guide for pictures.

Karan Johar disclosed the secret of Ranveer Singh! This segment reveled how Ranveer was interested in Alia’s wedding jewellery, mehendi ceremony and more!

Alia mixing with the Kapoor family

After Rishi Kapoor’s death, Alia stayed with her mother-in-law Neetu Kappor to take care of her. She then realized how the Kapoors did everything together – from prayers to eating together, It was a different experience for her.

Though Arjun Kapoor was not on the sets of the show but his presence seen during a game as Ranveer Singh video called his best friend and had a chat with him!