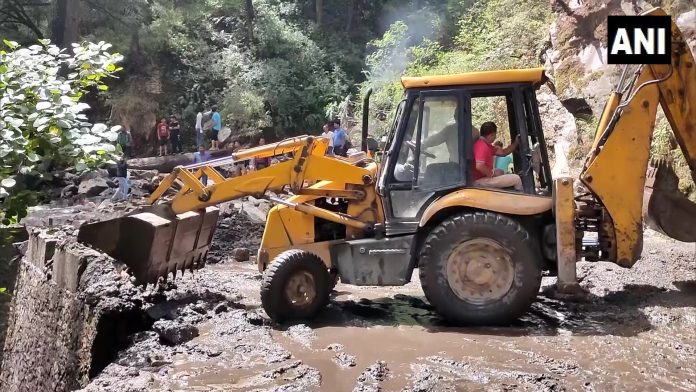 Kullu: Several people are feared to be washed away in the recent flash floods caused by a cloud burst causing havoc and chaos in Choj Nullah in Parvati Valley of Kullu district on Tuesday.

The flash flood caused damage and destroyed and washed away the only bridge that connected the village to the mainland.

He further confirmed that 4-6 people have been reported missing in the flash flood. Rescue operations are underway. According to the reports, a migrant worker was confirmed dead in the incident.

In Bhuntar of Kullu, a building was damaged and had 25-30 employees stuck in it but were later rescued by the police and fire team. Shimla has been showered with heavy rainfall since late Tuesday night.

Vikash Shukla, SDM Kullu said that “In a cloud burst that happened around 4 am, 2 places including Malana nullah & Choj, Parvati valley were affected. 2 houses were destroyed at a camping site in Choj. We suspect 4 have drowned & 2 are trapped.”

He further added that 25 people were rescued from Malana while a woman drowned in the flash flood. Four roads have been blocked in Parvati Valley. Two roads have been cleaned by the authorities.

The weather department has further confirmed heavy rainfall to continue till Wednesday.