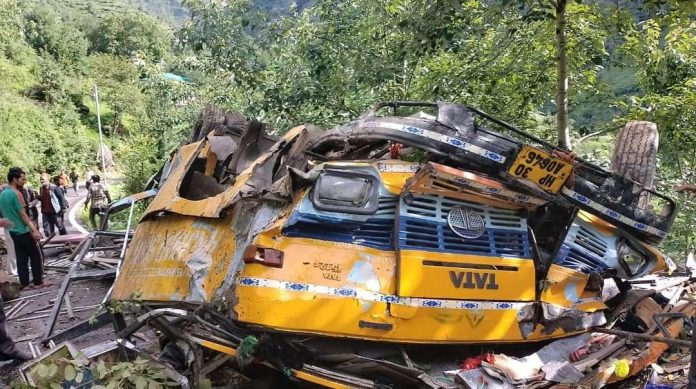 Kullu: At least 10 people, including school children, were killed and several injured after a private bus rolled off a cliff in Himachal Pradesh’s Kullu district on Monday morning, an official said.

The incident took place around 8 a.m in the Jangla area of Sainj valley on Neoli-Shansher road.

Several school children were travelling on the bus.

The injured are being shifted to local hospitals in Kullu.

Meanwhile, Prime Minister his grief over the incident and announced ex-gratia of Rs. 2 lakh each to the kins of dead, and Rs. 50,000 to the injured from the Prime Minister National Relief Fund.

“The bus accident in Kullu, Himachal Pradesh is heart-rending. In this tragic hour my thoughts are with the bereaved families. I hope those injured recover at the earliest. The local administration is providing all possible assistance to those affected,” PMO Tweeted.

“The Prime Minister has approved an ex-gratia of Rs. 2 lakh each from PMNRF for the next of kin of those who have lost their lives due to the tragic bus accident in Himachal Pradesh. The injured would be given Rs. 50,000 each,” PMO added.