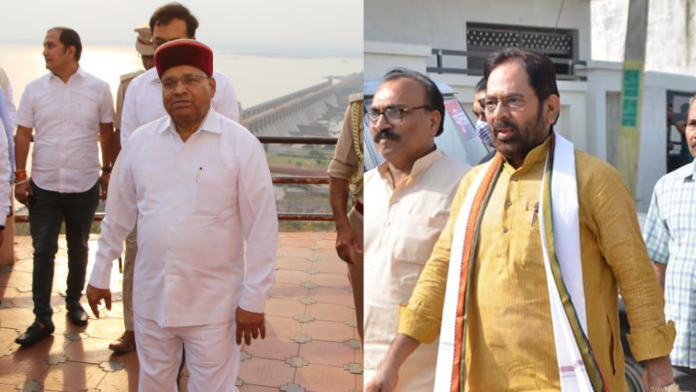 After surprising everyone by choosing Droupadi Murmu to be NDA’s Presidential candidate and, thereby, setting the stage for her to be India’s first tribal head of state, Prime Minister Narendra Modi could provide a second surprise.

The term of the incumbent Vice President Venkaiah Naidu ends on August 10. The Election Commission has announced that the VP election is to be held on August 6. The date on which counting, if required, shall be taken on the same day.

As there is very little chance of Venkaiah Naidu getting a second term, Gehlot is said to have emerged as the favourite of the BJP. He is a Dalit leader from Madhya Pradesh who had a long inning in the BJP as a central minister and a top party functionary till he was sent to Bengaluru as governor in July 2021.

Gehlot’s chances are said to be bright because, while picking the Vice Presidential candidate, it is necessary for the PM to keep in mind that the person should also be able to run the Rajya Sabha where the opposition is very aggressive.

Gehlot, 74, was also the Leader of the House in the Rajya Sabha and the Minister of Social Justice and Empowerment from 2014 to 2021. He was a member of the Parliamentary Board and the Central Election Committee of the BJP.

If it is not Gehlot, Modi’s pick could be Naqvi who is the Union Minister of Minority Affairs. He was a member of the Rajya Sabha from Jharkhand and Deputy Leader of the House Rajya Sabha till his term ended last month. Naqvi remains a Union minister presently as he can do so for the next six months without being a member of Parliament.

Naqvi has had a long inning as Union parliamentary affairs minister. He served in the Vajpayee government too. The buzz is if he does not become the VP candidate, then he could be considered to fill one of the six vacancies for Governors.

Other names being speculated for selection as Vice President candidate include Kerala Governor Arif Mohammed Khan who is the face of moderate Muslim leadership in India. He advocates reforms in the Muslim Personal law and often takes on the fundamentalist and extremist forces. He has been vocal on bringing in the Uniform Civil Code.

Khan had resigned as Minister of State from the Rajiv Gandhi Government following its stand on the Shah Bano case in 1986. Khan defended the Supreme Court judgment on the Shah Bano case in Parliament on the issue of maintenance for divorced women. But He was very upset that Congress brought in changes in the law to obviate the judgement. Khan had also opposed triple talaq.

Among other names doing the rounds are that of Telangana Governor Dr Tamilisai Soundararajan, who hails from Tamil Nadu. She belongs to the Nadar community, which is listed as a Backward Class. La Ganesan, who is the incumbent Governor of Manipur and belongs to Tamil Nadu, is also on that list. The name of Dr Hari Babu Kambhampati who is now Governor of Meghalaya and originally hails from Telangana is also said to be under consideration. Iqbal Singh Lalpura, the former IPS officer and Chairman of the National Commission for Minorities, also figures among those names.

As in the case of the election of the President, the opposition, which has fielded Yashwant Sinha, has very less chance of ensuring victory for its candidate in the VP election too. The electoral college for the VP election consists of the Members of Parliament of the Lok Sabha and Rajya Sabha. The electoral college comprises 233 Rajya Sabha members, 12 nominated Rajya Sabha members and 543 Lok Sabha members. The EC said the list would be updated if the 51 vacant Rajya Sabha seats and seven nominated members are filled or named during the election process. The BJP has a huge mandate in the Lok Sabha while in the Rajya Sabha, it is the single largest party with more than 95 seats.

In the last election, Gandhiji’s grandson Gopalkrishna Gandhi was fielded as the joint Opposition candidate but he lost to Venkaiah Naidu. This time also Gandhi’s name was proposed for the Presidential candidate but he declined the offer after Sharad Pawar and Dr Farooq Abdullah. In 2017, Venkaiah Naidu got 516 votes, defeating Gandhi who could manage only 244 votes.

The Monsoon Session is expected to be stormy. Congress is determined to make a big issue of Rahul Gandhi’s questioning by the Enforcement Directorate. The Agnipath recruitment scheme will also be raised by the Opposition parties which have taken to the streets.

Last year’s Monsoon session ended on a stormy note as Opposition parties had disrupted both Houses over the Government’s unwillingness to allow discussion on the Pegasus snooping scandal, the farmers’ protests, and the rise in prices, especially of auto fuels. In fact, the Monsoon Session in 2021 was the third least productive Lok Sabha session of the last two decades, with productivity of just 21 per cent. Rajya Sabha logged productivity of 28%, its eighth least productive Session since 1999.