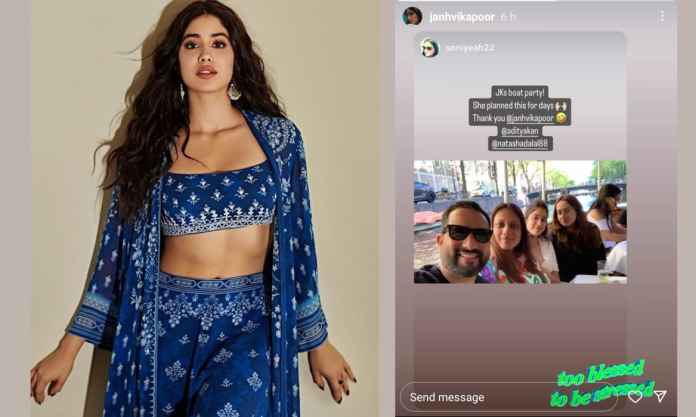 Actor Janhvi Kapoor re-posted a story of a party thrown by her where she can be seen sitting next to Natasha Dalal, wife of Varun Dhawan. Janhvi was wearing a white dress while Natasha wore a black dress.

Janhvi Kapoor and Varun Dhawan, both are shooting for their upcoming film ‘Bawaal’ directed by Nitesh Tiwari. The film revolves around a love story.

Talking about the Instagram story Janhvi had wrote, “JK’s boat party! She planned this for days with high five emojis. Thank You @janhvikapoor, @adityakan, @natashadalal88 with laughing emojis.” To this Janhvi replied ‘too blessed to stressed.’

Janhvi and Varun’s film titled ‘Bawaal’ will be released next year. Janhvi will be seen in ‘Good luck Jerry’ slated to release on July 29, 2022, on Disney plus Hotstar.