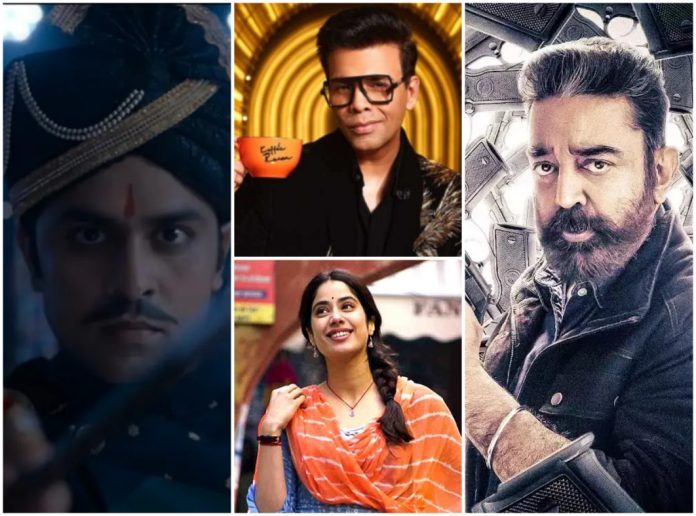 The Boys Season 3 and Vikram, among other much anticipated films and shows were released during the exciting month of June and now popular OTT platforms have revealed the line-ups for the month of July.

Here is a list of all most awaited storylines that are perfect to binge at a rainy-July-home day.

One of the actors who is continuously loved and appreciated by the audiences across genres is Jitendra Kumar, staring in the film Jaadugar. The trailer for Jaadugar, a forthcoming OTT release by Jitu Bhaiya, broke the internet. When it comes to football, Jitendra’s character Minu doesn’t seem to be interested but want to be a ‘Jaadugar,’ but he is forced to play by his coach, the movie lso has a huge part to a love story. Another major cast is Javed Jaafery, played a role of a father figure.

Watch Jaadugar on July 15, on Netflix.

The old classic show Koffee with Karan has been revived for a seventh season, but now onwards on OTT. the host and creator Karan Johar got back on couch with his friends from the industry, gossip, entertaining rapid-fire rounds, and lavish gift baskets.

Watch the show from July 7, on Disney+ Hotstar.

The action film Dhaakad starring Kangana Ranaut will be released digitally. Nearly 45 days after its theatrical release, the movie will be streamed. Critics praised Kangana’s performance however the movie didn’t connect with the viewers. Dhaakad follows Kangana Ranaut as a special agent who goes against the coal mafia, played by Arjun Rampal.

Keep the fire extinguishers ready! Agent Agni is coming soon to set your screens on fire! 🔥

Watch the World Digital Premiere of #Dhaakad on 1st July, 2022 only on #ZEE5. pic.twitter.com/hEkclPUzf2

Good Luck Jerry is an upcoming black comedic criminal film, directed by Sidharth Sengupta. The film’s lead actor is Janhvi Kapoor, and Deepak Dobriyal, Mita Vashisht, Neeraj Sood, and Sushant Singh are among its other prominent actors. The movie is an adaptation of the 2018 Tamil movie Kolamaavu Kokila.

Ranveer Vs Wild With Bear Grylls

Featuring Ranveer Singh in the wilderness with adventurer Bear Grylls, the show is about Singh daring what Bear Grylls does. Moving across jungles, rock faces, and caves, he encounters wolves, bears and snakes and whatnot. But he must survive them all in order to back safe. Watch Ranveer Vs Wild With Bear Grylls on July 8th, on Netflix.

The megastar Kamal Haasan’s return to the big screen.
After its June 3 theatrical release, the movie had worldwide popularit at the box office. The film directed by Lokesh Kanagaraj is definitely going to join the Rs. 400cr club shortly.

Movie releasing in theaters but are worth talking about; R Madhavan’s directoral and debut, Rocketry: The Nambi Effect’s story is based on the life of Nambi Narayanan, a former scientist and aerospace engineer at the Indian Space Research Organisation. It will follow his time as a student at Princeton, his career and the time when he was falsely charged with espionage in 1994. The film got a standig avoation whenscreened at the Cannes Film Market. Watch Rocketry: The Nambi Effect in theaters on July 1st.
The biographical drama Shabaash Mithu is based on Mithali Raj, a legend in Indian women’s cricket, who recently announced her retirement . One of the most significant female cricket players in history will be profiled in the movie via her life. Her characterwill be played by Taapsee Pannu. Watch Shabaash Mithu on 15th July.
ShareTweetGoogleWhatsappPrint
Mail