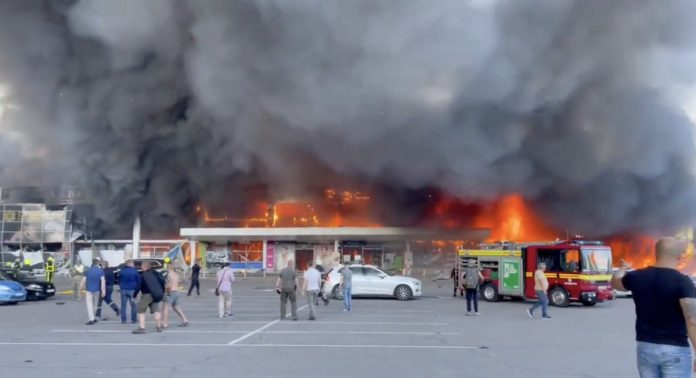 According to reports, there are at least 18 deaths recorded with 59 injured and 25 being hospitalised. Another missile hit the city’s stadium.

“Only completely frozen terrorists who should have no place on the ground can hit such an object with missiles. And this is not a false hit of missiles, it is a calculated Russian strike,” said President Volodymyr Zelenskyy.

“Putin must understand that his behavior will do nothing but strengthen the resolve of the United Kingdom and any other G7 country to support Ukraine as long as necessary,” said Prime Minister Boris Johnson.

• The war was Officially announced on February 24th, 2022, by Russia. The invasion began with launching 100 missiles from both Air as well as Waterways. The invasion was conducted from three different regions- Belarus towards Kyiv, Kharkiv, and Kherson.
• President Zelenskyy started posting videos on social media asking for help from the other Countries and refused himself to be rescued from Kyiv.
• On 25th March, Russia announced to captivate the Donbas region.
• On April 1st reports were held by the Ukrainian officials after the Russian army backed themselves from Kyiv that more than 10 people were found dead while their hands were tied in the back and most of them were shot in the head. The horrible happening was named as Bucha Massacre.
• On April 13th, the Biden government rolled out the commitment of sending M777 Howitzers to Ukraine. The US officials also started training the Ukrainian Army for operating the weapon.
• On April 14th, Ukraine attacked the Warship leading the Russian fleet, and after battling a disastrous attack, the ship finally sank.
• After battling for so many days, Ukraine finally pushed the Russian army back to the border from Kharkiv in the first week of May.
• On June 1st, The United States announced that it will provide HIMARS (High Mobility Artillery Rocket Systems.
European Union came forward acting as helping hands for Ukraine. On June 23rd, 2022, EU granted the candidate status to Ukraine and showed their gratitude towards the suffering country. European leaders from France, Italy, Germany, and Romania met President Volodymyr Zelenskyy on Thursday, June 16 for the first time and expressed their support for Ukraine’s tough time.

The European Union in the meeting spoke about more weapons that will help Ukraine in building armoury stronger against Russia.

The European Union in the meeting spoke about more weapons that will help Ukraine in building armoury stronger against Russia.