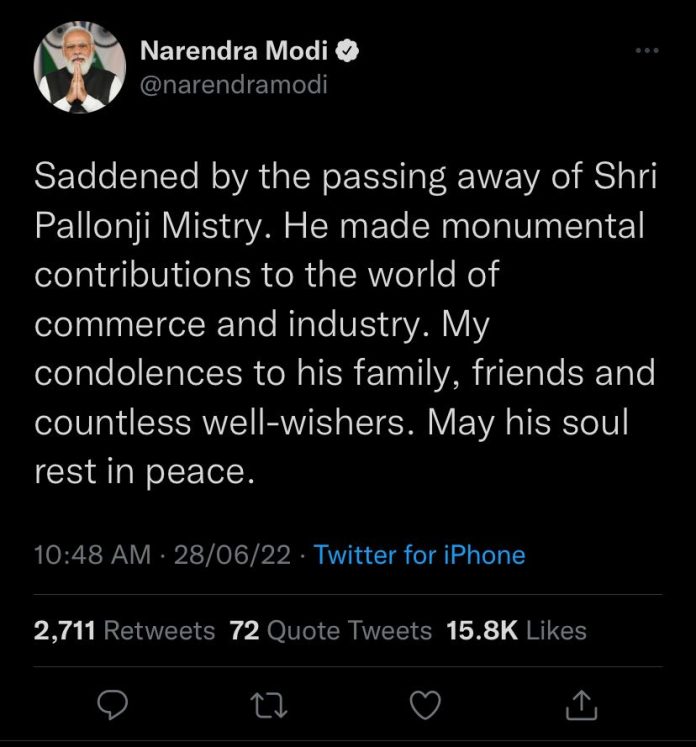 Pallonji Mistry (1 June 1929 – 28 June 2022) was an Indian-born Irish Billionaire of his construction tycoon and chairman of Shapoorji Pallonji Group.

The largest individual shareholder in the Tata Group with an 18.4 percent holds in the conglomerate, Pallonji Mistry was 93.

Pallonji, the head of Shapoorji Pallonji Group at his residence, company officials said on Tuesday.
Pallonji Mistry, died mid-sleep at his south Mumbai residence on the intervening night of Monday and Tuesday informed by officials.

According to Bloomberg Billionaires Index, Pallonji’s wealth was estimated to be US$28.0 billion as of 9 April 2021. He was the world’s 143rd richest person and the richest Irish billionaire at the time of his death.

Prime Minister, Narendra Modi has expressed grief on the passing away of Pallonji Mistry through his tweet, Mr. Modi said, Pallonji made a contribution to commerce and monuments. And expressed condolences to the family and well-wishers of Mr. Mistry.