This Is How Social Media Reacting To ‘Jug Jugg Jeeyo’ | Newsmobile
Sunday, September 25, 2022 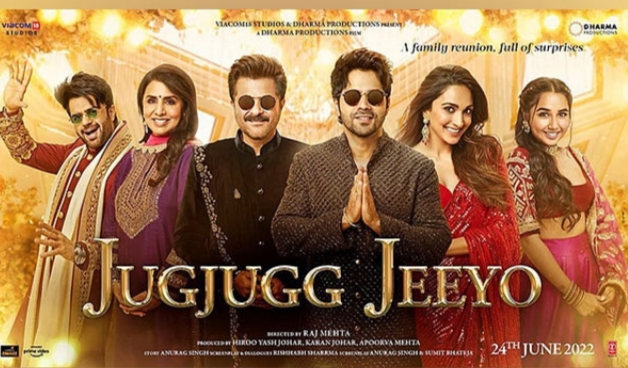 The film shows the typical Punjabi family and how they deal with their problems. The film received appreciation from fans as they all say, “Karan Johar has brought back a film full of emotions.” The fans rated the film as 4 out of 5.

One of the fans tweeted, “#JugJuggJeeyoReview @karanjohar did it again a complete family entertainer, it’s a blockbuster” while another said, “Tbh this movie is the best example of how relationship and family works…@Varun_dvn what a comeback.” There were many more tweets by fans telling how the film was hilarious and emotional as well.

Sara Ali Khan took her Instagram to congratulate and appreciates the film’s work. She tagged the whole cast saying, “What an amazing, heart-warming, tear-jerking and fully entertaining wholesome film” the post was re-shared by a tweet.

Fans also separately talked about the performances of their favourite actors as one fan tweeted about the successful films given by Kiara Advani including Jug Jugg Jeeyo. The praise from Karan Johar to all the star cast tells the love of the audience for the film.

#JugJuggJeeyoReview @karanjohar did it again…a complete family entertainer..It's a blockbuster
⭐⭐⭐⭐

Tbh this movie is the best example how relationship and family works ❤️. The movie have a very beautiful message. You should go with your family. A full of laughter, emotions, drama and heart taking movie. @Varun_dvn what an come back🤌❤️ #JugJuggJeeyoReview #RajMehta pic.twitter.com/xB6BjSIhz2

#JuggJuggJeeyo is an entertaining family drama with good blend of comedy n emotions. @AnilKapoor is fabulous while #NeetuKapoor is all heart. @advani_kiara gets a meaty role n she perfectly shows her potential. @Varun_dvn is decent n @ManishPaul03 is winner. #JugJuggJeeyoReview pic.twitter.com/6vqx1mPIGm