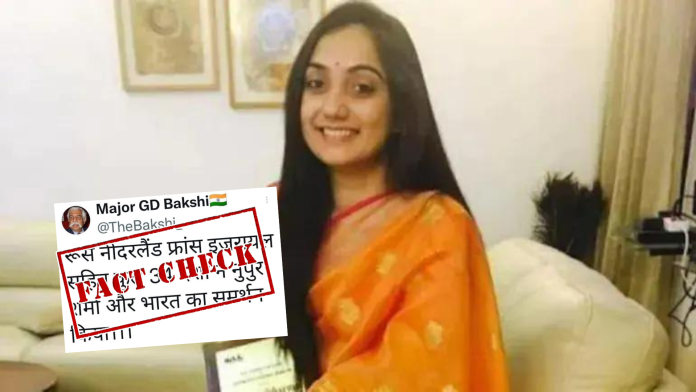 Amid ongoing protests in India and abroad over suspended BJP spokesperson Nupur Sharma’s controversial statement on Prophet Mohammad, a claim is doing rounds on social media suggesting that 34 nations including Russia, Netherlands, France and Israel have extended their support to Sharma. 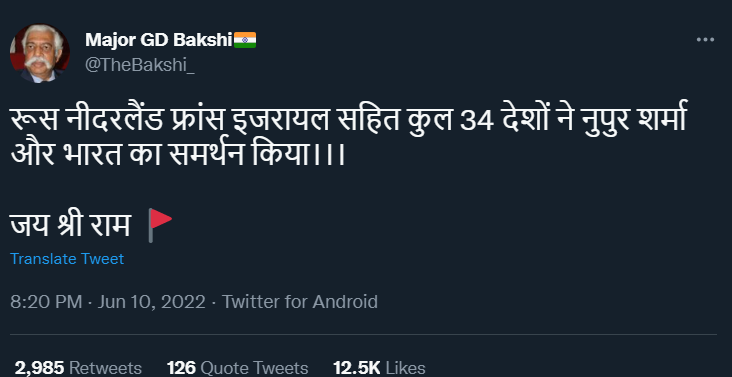 NewsMobile fact-checked the above claim and found it to be false as we could not find any official statement by any country supporting Nupur Sharma.

Upon running a relevant Google search we did not find any news report corroborating the viral claim that 34 countries have supported the suspended BJP leader.

However, Dutch politician, Geert Wilders (member of the opposition), did Tweet in support of Sharma, but the Netherlands did not release any official statement on the matter.

It is ridiculous that Arab and Islamic countries are angered by Indian politician #NupurSharma @NupurSharmaBJP for speaking the truth about #ProphetMuhammad who indeed married Aisha when she was six years old and consumed the marriage when she was nine. Why does India apologize?

Hence, we can conclude that the claim of 34 nations supporting Nupur Sharma is False.