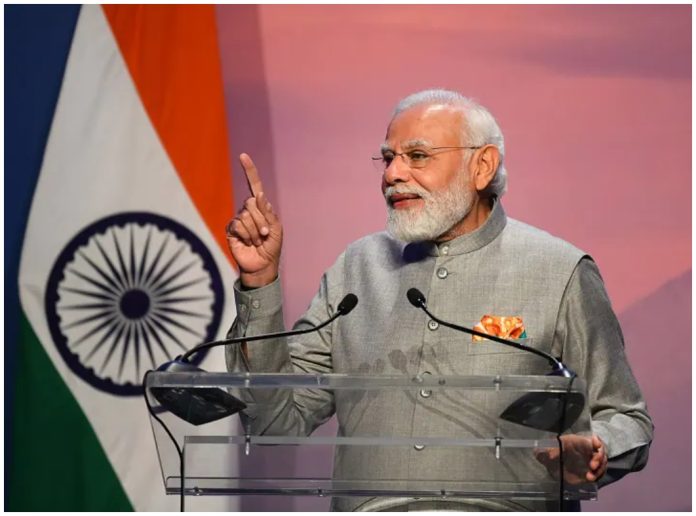 PM Modi hailed the country’s defence during his tenure. The report mentioned “Positive indigenisation lists” which include the government’s efforts in the field of reducing India’s dependency on foreign markets for acquiring weapons and promoting domestic manufacturing and supply.

A total of 310 items were incorporated into these lists to enhance the vision of Atma Nirbhar Bharat. The report further added the modernization of old factories which led to an increase in the efficiency of the armed forces.

The report also mentioned the establishment of the Defence Industrial Corridor (DIC) in Tamil Nadu and Uttar Pradesh with the aim of strengthening the defence ecosystem in the country.

Emerging from Global Crisis With Vision of Atmanirbhar Bharat

The report talks about the vision of Atmanirbhar Bharat by PM Modi during the COVID pandemic outbreak. It further mentioned the efforts at the time of COVID and how India supplied medicines to over 100 countries.

The report further talked about various trade agreements and partnerships signed by India with different countries to promote and exchange advanced technologies between countries to foster development. The trade pact with Australia is expected to rise from $27.5 billion to $45 billion in five years. The report also mentioned the agreement between India and UAE.

Leaving No One Behind

The Modi government highlighted the efforts made by the centre in terms of overseas collaboration and efforts.

The report added the effort of “Operation Ganga” where the government brought back students and Indian nationals from crisis-stricken Ukraine and Russia, and “Operation Raahat” where India evacuated 6,710 people from Yemen.