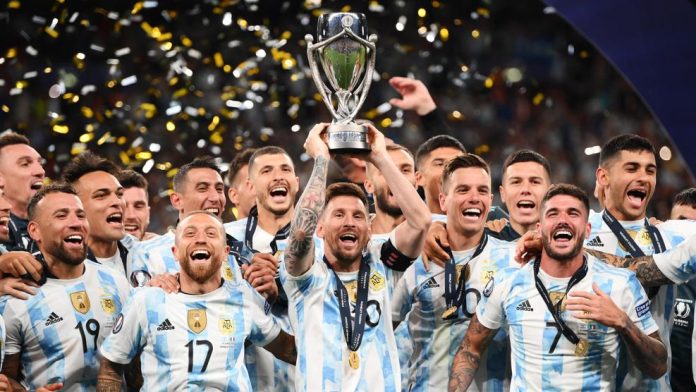 Angel Di Maria tried to lob Gianluigi Donnarumma from halfway inside two minutes as the South American champions tugged the beard of their European counterparts, but it was discipline and superlative passing that left Argentina 2-0 up at the break.

Donnarumma barely had time to recover from denying Lionel Messi after a typically sparkly move when the Paris Saint-Germain man held off Giovanni Di Lorenzo in the box and squared for Lautaro Martinez to flick the ball in from close range.

With Lionel Scaloni’s side asking all the questions, Italy might have been relieved to head in at the break just 1-0 down, yet they were caught on the hop in added time. Goalscorer turned provider as Lautaro Martinez took up possession in midfield and sent an elegantly weighted low ball forward for Di Maria, who sped in to clip over the despairing Donnarumma.

Roberto Mancini made three changes at the break, notably taking off Giorgio Chiellini in his final international game, but matters did not improve. Not long after preventing a Leonardo Bonucci own goal, Donnarumma had to pull off a magnificent save to hook a Di Maria shot out from under his crossbar, and he was lucky to be in the right place when the Paris forward met a corner with a bullet-hard volley from outside the box.

Italy came from behind to win UEFA EURO 2020 at this venue, but there was little suggestion that a comeback was possible this time as chances kept piling up at the other end.

With Giovani Lo Celso hitting the side netting and Messi denied three times by Donnarumma, the scoreline barely reflected the extent of Argentina’s dominance – until Paulo Dybala popped up to finish after Messi had been tackled on the edge of the Italy box.

Player of the match Lionel Messi won a trophy at Wembley for the second time in his career; his Barcelona side won 3-1 against Manchester United at the same venue in the 2011 UEFA Champions League final.