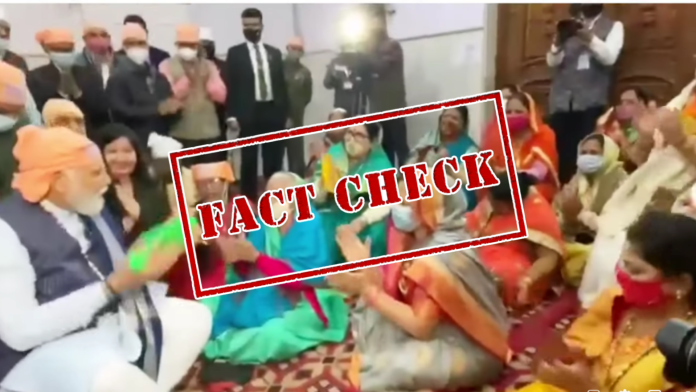 A video of Prime Minister Narendra Modi is doing the rounds on social media, in which he can be seen playing a musical instrument — jamming on the hit 2006 Hindi song ‘Kya Mujhe Pyaar Hai’ — sitting on the floor with a group of people.

The video can be seen here

NewsMobile fact-checked the above post, and found it to be doctored.

On putting the keyframes of the video through Google Reverse Image Search, we found a video from the same event from a different angle on the official YouTube channel of newswire ANI, uploaded on February 16, 2022, in which we could not hear the song.

The title of the video stated that PM Modi took part in the ‘Shabad Kirtan’ at Guru Ravidas Vishram Dham Temple on the occasion of 645th birth anniversary of Sant Ravidas.

On digging further with relevant keywords, we found the exact same video on the official YouTube channel of PM Modi.

We also ran the audio through the Shazam app and the result showed Kya Mujhe Pyar Hai by Khudgarz. We found the original song source on the YouTube channel of Khudgharz band official. The song was picked up from the 03:10 time counter and inserted over PM Modi’s video.

With the above findings, it is clear that PM Modi’s video in question is doctored.

(Editor’s Note: Our readers brought to our notice that a post of Hon’ble PM of India was not fact-checked by us. It was flagged because of a tech glitch by the platform concerned and we have raised the matter with them to rectify it. We want to thank our readers for bringing to our notice and we stand committed to the highest standards of journalism.)