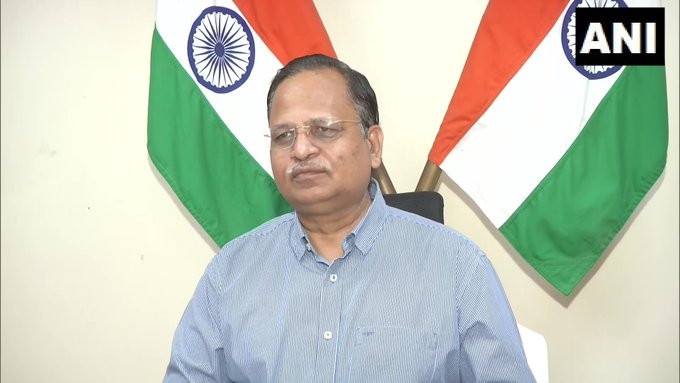 New Delhi: AAP Health Minister Satyendar Jain has been transferred under the custody of the Enforcement Directorate till 9th June in connection to the money laundering case.

Chief Minister Arvind Kejriwal in a press briefing said that “It’s a false case against Satyendar Jain. We are hard-core patriots.”

He further added that the allegations against him are false and he has been arrested in view of politics.

CBI officials informed that “No closure report has been filed against Satyendar Jain.” The CBI back in, on August 24th, 2017, had registered a DA case against him and a charge sheet was filed against him on December 3, 2018.

According to reports, CBI first filed a Preliminary Report (PE) in 2017 after receiving a complaint from the Vigilance Department of the Delhi government. FIR was registered later based on the findings, searches, and raids.

CBI further added that “ According to the complaint, it was informed through advertisements that these professionals would be paid between around Rs 25,000 to Rs 1,00,000 as per the ‘trending market rate’.

The ED on Monday arrested Delhi Health and Home Minister Satyendar Jain in connection with an alleged Hawala transaction-based out of a Kolkata-based company.

According to reports, He was allegedly involved in buying several shell companies in Delhi. He also allegedly laundered black money worth ₹16.38 crores through 54 shell companies of three hawala operators of Kolkata. Jain allegedly owns a large number of shares in companies named Prayas, Indo, and Akinchan.

According to reports, after becoming a minister in the Arvind Kejriwal cabinet, all his shares were transferred to his wife in 2015.

Arvind Kejriwal in a statement said that the case against his minister is “completely false”. He further added that he has faith in the judiciary of the country.